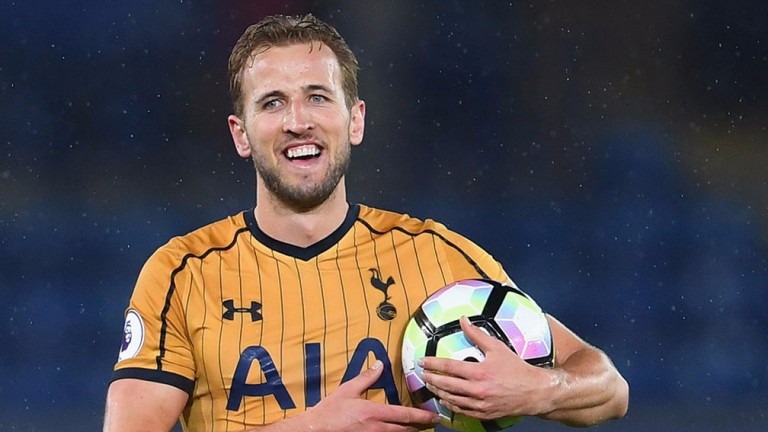 Harry Kane scored four against Leicester on Thursday
Getty Images
1 of 1
By Mark Langdon 8:00PM, MAY 19 2017

Harry Kane's four-goal haul against Leicester means he will go into Sunday's final round of Premier League fixtures as a red-hot favourite to finish as the top flight’s leading marksman.

Kane, 1-14 to be the Premier League’s top goalscorer, has moved on to 26 goals, two clear of Everton’s Romelu Lukaku and three ahead of Arsenal’s Alexis Sanchez and Tottenham’s last match looks relatively easy on paper at relegated Hull.

Should Kane justify his short price he would become the first player since Robin van Persie in 2013 to retain the Golden Boot and before that it was Thierry Henry, who scooped a hat-trick between 2004-06.

It has not been smooth progress for the Tottenham forward this season after he missed two chunks of the campaign because of injury and is racking up a goal every 94 minutes.

Bet365 rate the England international 3-1 to score at least 25 goals next season, although Tottenham won’t have the benefit of home advantage with the temporary switch to Wembley.

However, Kane has shown a hunger for goals despite being 50-1 for the Golden Boot in November after scoring just once in five appearances, while he was still 16-1 at Christmas.

Kane suffered his second injury against Millwall in the FA Cup on March 12 and only returned to the Spurs starting 11 on April 15 since when he has scored seven eight times in seven league games.

The 23-year-old had been 7-1 and second in the ante-post market behind Sergio Aguero, while long-time leader Lukaku was 12-1 before a ball was kicked.

Lukaku is out to double figures having been as short as 1-8 last week before Kane went goal crazy and Sanchez got himself into contention with a goal at Stoke and two against Sunderland.

The two chasing Kane meet at the Emirates with Lukaku 16-1 to land the top scorer honours and Sanchez 35-1.

Unusual things can happen on the final day and Crystal Palace could be in the remarkable position of being favourites to beat Manchester United at Old Trafford.

Bookmakers are split, while Palace are 2.8 on Betfair’s Exchange and United are 2.84 with Jose Mourinho prepared to fill his side with youngsters as the Manchester men prepare for Wednesday’s Europa League final against Ajax in Stockholm.