Sale Sharks could be ready to finish the job this time 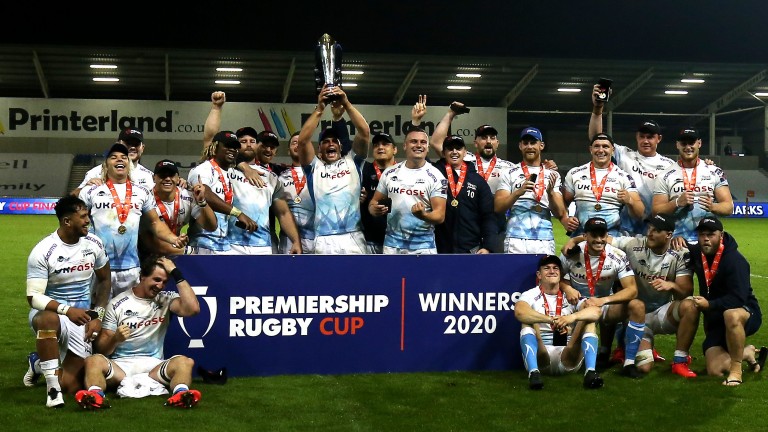 Less than a month after their Grand Final triumph at Twickenham, when they added the Premiership trophy to the European Champions Cup they had won the week before, Exeter kick off a new rugby union season with a visit to Harlequins.

The Chiefs topped the regular-season table for the third consecutive year in 2019-20, but the big difference in the campaign was that Saracens weren't right behind them and then waiting for them in the final.

Sarries had been in five of the previous six finals, three of them against Exeter, and the Premiership betting had been turned into a two-horse race.

But with Saracens' relegation following a huge points deduction for breaching the salary cap, Exeter are now just 1-4 to finish as regular-season winners again, and no better than 11-10 to win the final.

It's hard to build a case against Exeter retaining their title given they are so well coached and drilled, supremely fit, and have so much depth to their squad. But their short price offers plenty of incentive to at least look for a little value elsewhere.

Wasps finished runners-up last term and were the beaten finalists, a scenario that looked pretty unlikely when the season was halted for lockdown with Wasps in sixth.

The lost just one of eight games after August's restart, taking six try-bonus points as their attacking threats really came to the fore. But there looks sure to be more intensity when a new campaign starts than there was in the summer when teams had to rotate heavily and relegation had already been settled, and Wasps may not have the same chance to shine.

There's more to like about the prospects of last season's other main challengers, Bristol and Sale.

Both added to their backline when the Premiership returned in August, Bristol boasting the lightning feet of Fijian Semi Radrada while Sale captured England centre Manu Tuilagi.

But both also look to have more all-round strength and can grind out wins as well as piling on points.

Sale were unable to complete their final fixture at home to Worcester and forfeited the points, but would have made the semi-finals if they had won that game. Their success in the Premiership Rugby Cup was a signal of what they are capable of and there is international class right through their ranks.

A big South African presence is headlined by half-back pair Faf de Klerk and Robert du Preez as well as World Cup-winning lock Lood de Jager. As well as Tuilagi there are the talents of Denny Solomona, Marland Yarde and Byron McGuigan, all held together by experienced coach Steve Diamond.

Last season could have been a breakthrough year for the Sharks and their talented squad can build on that.

Bristol are equally blessed in the coaching department with Pat Lam at the helm and they also picked up silverware last season, winning the European Challenge Cup.

Bristol and Sale both beat Exeter at Sandy Park last season and look to be the only clubs who can be relied on to find the consistency for a top-four finish and run to the final.

Bath were the only other team to win more than ten games and they look a far more rugged side since Neal Hatley returned as head coach in July. Their backline is star-studded but they also need to prove their all-round strength over the full stretch of a campaign.