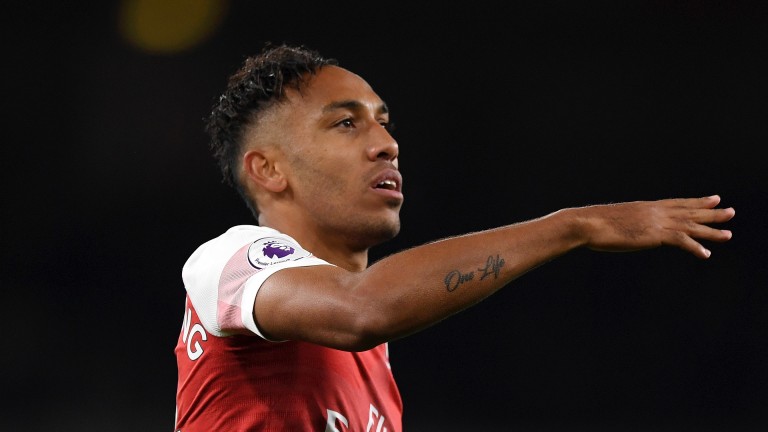 Pierre-Emerick Aubameyang has been prolific
Shaun Botterill
1 of 1
By Mark Langdon 1:59PM, OCT 28 2018

Arsenal have won 11 matches in succession and victory number 12 could be coming up away to Crystal Palace as the Unai Emery revolution gathers pace.

Selhurst Park was a tricky ground for England's elite to visit last season as Chelsea were beaten, Manchester City could only draw and Liverpool, Manchester United, Spurs and Arsenal squeezed home by one-goal margins.

However, Palace are unsure of themselves and clearly lacking in confidence, a point proven by their late collapse to lose 2-0 to Everton last week.

There's such little attacking intent other than talisman Wilfried Zaha whereas Arsenal are full of goals with Emery's side always looking to get on the front foot.

Thursday's 1-0 win in Lisbon over Sporting was the first time since the opening weekend of the season that Arsenal had not scored at least twice in a game and some of their recent attacking play has been a joy to watch.

Mesut Ozil is back playing with a smile on his face following a difficult personal time for him either side of the World Cup and the German is capable of supplying the assists for Alexandre Lacazette and Pierre-Emerick Aubameyang.

Gabon goal machine Aubameyang has notched seven times in the Premier League despite often having to play from the left when he is selected at all, while Palace have scored two goals fewer than him alone, which does not bode well for their chances of an upset.

There are negatives for those looking to lump on Arsenal.

Winning runs don't go on forever and they are performing well ahead of their expected goals ratings, suggesting a fall may not be far away, particularly as the Gunners remain a work in progress defensively.

They have had a soft run of fixtures too with the away successes during their hot spell coming at Cardiff, Newcastle, Qarabag, Fulham and Sporting.

But Palace have scored only one Premier League goal in their last four fixtures and the Selhurst season-ticket holders are still waiting to cheer their first top-flight home goal of the campaign.

Zaha remains a wonderful talent, arguably the best individual outside of the big six clubs, but Christian Benteke's injury has clipped the Eagles' wings.

Benteke become something of a laughing stock for the number of chances he missed, but he had a crucial role to play as the focal point to the attack.

If Palace don't possess the tools to hit Arsenal's weaknesses then it could be a long 90 minutes and while Roy Hodgson is known for being able to set up a team defensively, at some stage the Gunners' extra firepower should prove decisive.

Arsenal
Nacho Monreal and Sead Kolasinac are close to returns, although if they miss out Granit Xhaka could once again fill in at left-back. Petr Cech is expected to be available but Laurent Koscielny lacks match fitness.

Key stat
Eleven of Arsenal's last 14 goals have come in the second half.