Next Premier League manager to leave and next Everton manager odds 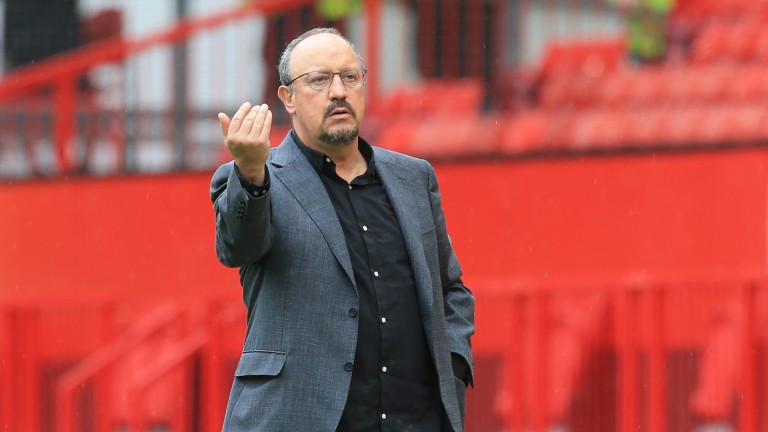 Disgruntled Everton fans made their feelings known after their team were outclassed by Liverpool on Wednesday and time could be running out for Toffees manager Rafa Benitez, who may struggle to keep his job beyond the end of this year.

Derby defeats are always hard to take and Everton fans responded to the 4-1 midweek loss with chants of 'sack the board' and other songs directed at club chairman Bill Kenwright and director of football Marcel Brands.

However, it is the manager who often pays the price for supporter discontent and the heat is on Benitez, who is 4-9 to be the next Premier League manager to lose his job.

The Spanish tactician is evens with Hills to remain in position beyond the end of 2021 and 3-1 with the same firm to stay put for the rest of the season.

Betfair and Paddy Power have priced up the next Everton manager market and make Denmark head coach Kasper Hjulmand the 3-1 favourite to take over at Goodison Park should Benitez depart.

Former Tottenham and Wolves manager Nuno Espirito Santo is next in at 9-2 with Toffees' favourite Duncan Ferguson available at 6-1 alongside ex-Chelsea boss Frank Lampard.

Benitez talked up the positives after his team lost 1-0 at Brentford on Sunday despite bossing the game for long periods, but it is hard to sugar-coat his team's results over the last two months.

The Toffees have taken just two points from their last eight games, leaving them five points above the bottom three, and their relegation odds have shrunk to 17-2.

A first top-flight relegation cannot be ruled out and Everton's prospects could worsen in the run-up to Christmas because their next four games - at home to Arsenal, away to Crystal Palace and Chelsea and at home to Leicester - are difficult obstacles.

Supporters will be looking for squad improvements in January but a loosening of the purse strings is far from certain, with the board anxious to get the club on a firmer financial footing and wary of holding some funds back for a proposed new stadium.

Over the longer term there could be lots for Everton fans to look forward to but, right now, there are major issues with the team which need resolving.

Winger Demarai Gray is their top scorer with four and they have lacked a more reliable source of goals since Dominic Calvert-Lewin was injured in August.

Getting the England striker fit will be key because his understudy Salomon Rondon has failed to score in 11 appearances.

They have conceded 15 goals in the last six games and if key areas are not strengthened in January, Everton could yet get dragged into a relegation battle.