Arsenal could be vulnerable to Hornets' stinging attack 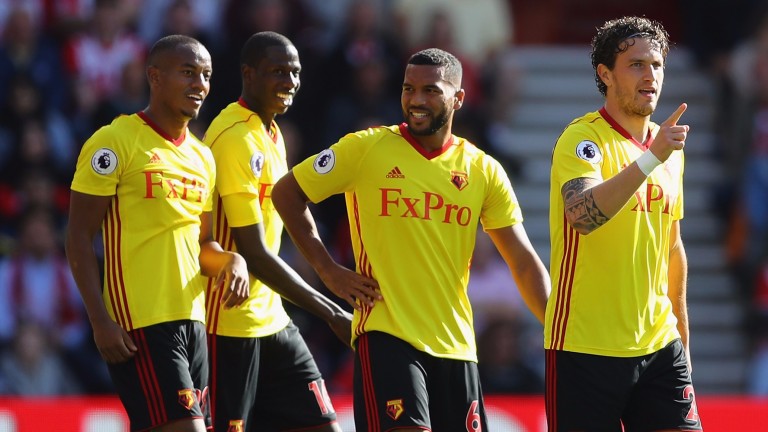 Watford could have plenty to smile about against Arsenal
Warren Little
1 of 1
By Dan Childs UPDATED 7:54PM, OCT 13 2017

Watford's bright start to the Premier League season has not won them much respect in the markets and they are good value to take at least a point against Arsenal at Vicarage Road.

Arsenal are up to fifth (their highest position of the season) and aiming to go higher by building on a four-match winning streak.

They have responded impressively since the dark days of August when back-to-back defeats at Stoke (2-1) and Liverpool (4-0) had reignited the debate over Arsene Wenger's future.

Arsenal's defence was all over the place in the loss at Anfield but there has been a distinct improvement since and the Londoners have kept clean sheets in four successive Premier League games.

Arsenal's recent defensive resolve may be undermined, though, by injuries to key players with Shkodran Mustafi (thigh) facing six weeks on the sidelines and Laurent Koscielny (Achilles) and Sead Kolasinac (hip) rated doubtful

Losing Koscielny or Kolasinac would be a major blow and offer extra encouragement to a Watford side blessed with plenty of attacking threats.

For two seasons in the top flight Watford were reliant on Troy Deeney to get the goals.

But Deeney has been reduced from kingpin to fringe player by a summer recruitment drive which has added extra firepower.

Pacy centre-forward Andre Gray was acquired from Burnley for a club-record fee and kept Deeney out of the side until the 2-2 draw at West Brom a fortnight ago.

Having a credible alternative centre-forward to Deeney has been a major plus but the bigger difference has been in the wide areas, where south American new boys Andre Carrillo and Richarlison add extra skill and pace, transforming Watford into a dangerous side with a genuine counter-attacking threat.

Watford's ability to turn defence into attack had been key to the sudden upturn in their away results (ten points from a possible 12 in road trips this season) and should help them against the Gunners, who will look to dominate possession and play on the front foot.

Defensively, Watford have been less impressive although Marco Silva could strengthen his back-line if Austrian centre-back Sebastian Prodl (last term's player of the season) passes a fitness test.

Arsenal will have increased options in attack with Mesut Ozil and Danny Welbeck fully recovered from injuries but their attacking output still relies considerably on Alexis Sanchez, who may be mentally and physically fatigued after taking part in Chile's 3-0 loss to Brazil on Tuesday which ended their hopes of qualifying for the World Cup.

According to Wenger, Sanchez was subjected to 'some special treatment' and the Arsenal gaffer was unwilling to confirm whether his star attacker would be selected to face Watford.

Arsenal would have a better chance with a fully engaged Sanchez in the line up but still wouldn't look anything like odds-on certainties against a Watford side whose only league defeat this season has come against Manchester City.

In January this year Watford went to the Emirates with a weaker side and posted a shock 2-1 victory.

They should give the Gunners another difficult game and are overpriced to avoid defeat.

Team news
Watford
Andre Carrillo was being assessed yesterday after his return from international duty with Peru. Sebastian Prodl (hamstring) is a doubt but Craig Cathcart, Nathaniel Chalobah (both knee) and Younes Kaboul (hamstring) are out.

Arsenal
Alexis Sanchez will be assessed after returning from international duty with Chile and Sead Kolasinac (hip) and Laurent Koscielny (Achilles) are doubts. Mesut Ozil (knee) and Danny Welbeck (groin) are available but Shkodran Mustafi (thigh) is out.

Key stat
Watford have scored at least two goals in six of their eight matches this season.