Magpies set for more misery at the Amex 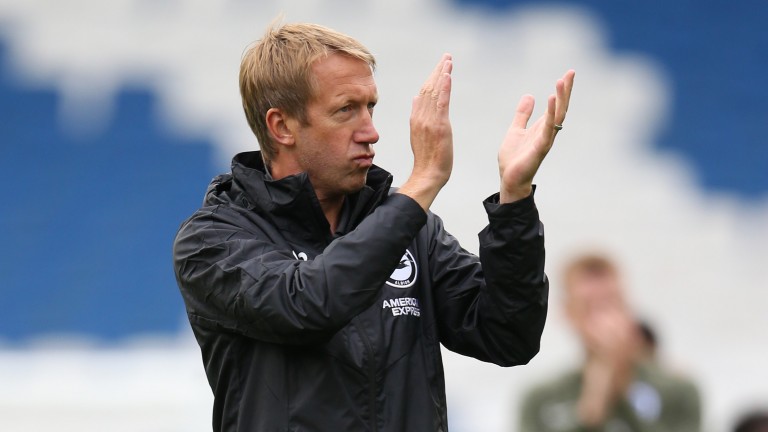 Brighton
Dan Burn is a doubt, Steven Alzate and Danny Welbeck are out.

Newcastle
Martin Dubravka could make his first start of the season. Paul Dummett remains out.

Eddie Howe will return to the workplace after 18 months away when he bowls up at St James's Park on Monday in the wake of Graeme Jones's final act as Newcastle caretaker – and if he doubted the size of the task facing him then this match should clarify a few things.

Battered 3-0 and 3-0 in their two tussles with the Seagulls last season, even those myriad Newcastle fans who travel with post-takeover optimism these days might fear the worst ahead of this trip.

But that was before this week when the search to succeed Steve Bruce finished, via a refusal or two from elsewhere, with Howe being handed a three-year contract and presumably millions to spend when the window opens in January.

It's easy to be underwhelmed by the appointment – many on social media have been – but Howe was being tipped for the England job not so long ago, somehow got Bournemouth from the basement to the top flight and has to have more about him than Bruce.

Indeed, merely having a new manager should provide everyone on Tyneside with a lift and he knows how to get a tune out of former Cherries Callum Wilson, Matt Ritchie and even the often-maligned Ryan Fraser.

But that alone doesn't answer the question of how to bet on this game. You can't make a silk purse out of a sow's ear and this is still a dire Newcastle outfit, incompetently organised, unfit and incapable of keeping a clean sheet.

And as if to prove there's been a weariness with the current coaching team, defender Emil Krafth has said a "new face and new voice" is required. Hardly a ringing endorsement of Jones.

The 90-minute prices look fair enough but Brighton aren’t the most clinical in front of goal and that makes a big punt on Graham Potter's side unappealing. More of a goal threat is needed to justify long odds-on quotes, and the Seagulls have drawn five of their last six in all competitions.

But because this is still Jones's team – in two games under him, they have averaged 23 per cent possession with a pitiful total of three shots on target – Brighton are hard not to like. Their only home losses since March have been against Everton and Manchester City, who are miles better than the Geordies, and they won the praise of The Kop for they way they came back from 2-0 down to draw 2-2 at Liverpool.

Newcastle have failed to score in seven of eight Premier League showdowns with Brighton.