Peter Wright could give Glasgow crowd something to cheer 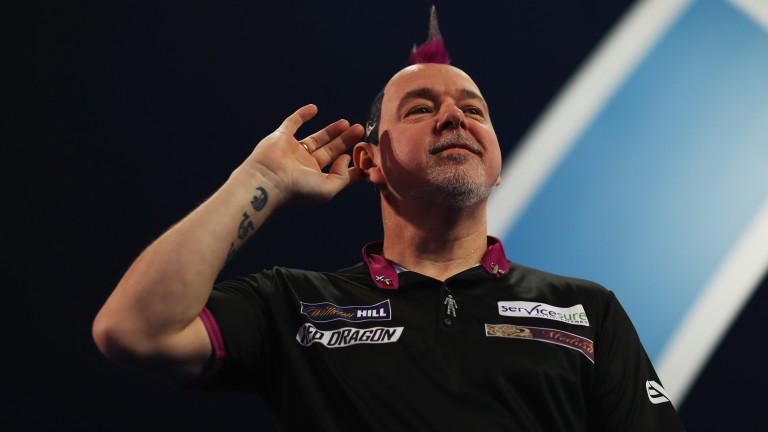 Michael van Gerwen laid down an impressive Premier League marker by beating second favourite Michael Smith on the opening night, and he’s a 1-3 shot to make it two out of two in Glasgow on Thursday.

Mensur Suljovic is the man charged with the task of trying to nick points off the world champion, who produced a 105 average against Smith last week, the highest of the night.

This week, of course, was supposed to be when the SSE Hydro paid homage to Gary Anderson but because of the Flying Scotsman’s back problems he is a Premier League non-runner. Three-time BDO world champion Glen Durrant steps in as a guest player to take on Daryl Gurney.

We are only six weeks into 2019 but Peter Wright has already taken care of Michael Smith twice and he can complete the hat-trick in Glasgow.

Snakebite beat Smith 10-6 in the Masters and pipped him 6-5 in a Players Championship heat in Wigan last weekend. A day later Bully Boy was being battered 6-0 by Keegan Brown in the second part of the weekend double-header.

Smith admitted he threw below par in his defeat by Michael van Gerwen in Newcastle, whereas Wright looked solid enough when averaging 101.5 in a 6-6 draw with Rob Cross.

James Wade looks underrated against Rob Cross, who he beat in four of their five 2018 meetings.

That was a year which ended with Wade throwing majestically and he has begun 2019 in fine fettle, too, reaching the Masters final and seeing off Raymond van Barneveld in Newcastle last Thursday.

Wade’s finishing against Barney was as accomplished as usual – seven doubles from 12 attempts – but so too was his scoring as he banged in four 180s.

Barney got off to a sluggish start against Wade last week, missing crucial doubles in a 7-4 loss.

But he still managed a 95-plus average and should be able to repeat that with his eyes shut against Gerwyn Price.

Barney boasts a decent head-to-head record against the fiery Welshman and the crowd will be firmly on the big Dutchman’s side. Price can expect a harsh reception given his shenanigans with Scottish hero Gary Anderson in the Grand Slam final and Van Barneveld has won his last five Premier League matches at the SSE.

Daryl Gurney drew the short straw when the guest contender he was paired with in the Premier League was revealed to be reigning Lakeside world champ Glen Durrant.

Gurney isn’t quite on his game anyway, while Duzza has taken kindly to life in the PDC, reaching a Players Championship final on his first weekend since winning a Tour card.

Van Gerwen should make it two out of two, though Mensur Suljovic can at least make the Dutchman earn his points.

Suljovic showed bags of class last week when coming from 5-1 down to snatch a draw against guest player Chris Dobey and he is too good a player to be blown away. Betfred offer correct-score bands and 7-4 or 7-5 to Van Gerwen looks the best bet.