Raymond Van Barneveld could be in trouble against James Wade 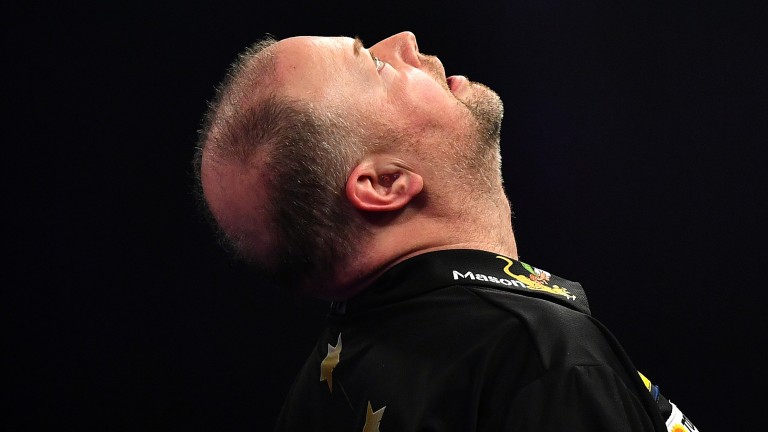 It's difficult to gauge what sort of nick Raymond van Barneveld will be in
Dan Mullan
1 of 1
By Steve Davies UPDATED 3:30PM, FEB 7 2019

Chris Dobey makes a guest appearance in front of his home crowd in Week One in Newcastle, taking on Mensur Suljovic in the third game of the evening.

Dobey is the first of nine different players, hand-picked by the PDC, who are being drafted in to fulfil the injured Gary Anderson's fixtures over the first nine weeks of the campaign. Anderson was forced to pull out of the tournament because of a back injury.

It's an interesting solution to a last-minute headache for the PDC and has inevitably divided opinions in the darting world.

The nine contenders – as the PDC calls them – merely get the kudos and appearance money. For their Premier League opponents, however, any points gained in those matches will count in their overall haul.

These two former winners meet for the 21st time in the Premier League and Wade looks highly likely to take all the beating.

Wade has headed north-east following a run to the final of the Masters and his confidence is sky-high.

He thrashed Van Barneveld 11-2 when they last met in November and it's anyone's guess what sort of nick the Dutch five-time world champ will be in.

Gerwyn Price and Daryl Gurney were the slowest of starters in last year's Premier League – Gurney couldn't win in his first six while Gezzy couldn't win at all.

It was 6-6 between them when they clashed in Week Three.
Price has an impressive head-to-head record against the Northern Ireland ace, though there doesn't appear to be an awful lot between these two.

Big-scoring Chris Dobey can treat his Premier League invitation like an exhibition and if he's as relaxed as he should be, expect the 180s to pile up.

Dobey is a massive maximum-gatherer and the 11-10 that he out-180s Suljovic can be backed.

The Austrian goes into the match in good form, though 4-5 is short enough considering he lost to the Englishman the last time they met.

It's a repeat of the world final in match four and Michael van Gerwen should prove too strong for Bully Boy once again.

They've met three times in regular-season Premier League games and Smith has yet to win more than two legs against the Dutchman. Smith made some giant strides in 2018 but these two are still a class apart.

There were good signs from Peter Wright over the weekend in Milton Keynes, where Rob Cross's woes carried on.

Voltage was desperate for a strong start to 2019 but fell at the first in the Masters, beaten by Joe Cullen.

Snakebite reached the semis and looks the bet in Newcastle.