Premier League visitors could make hay on the road 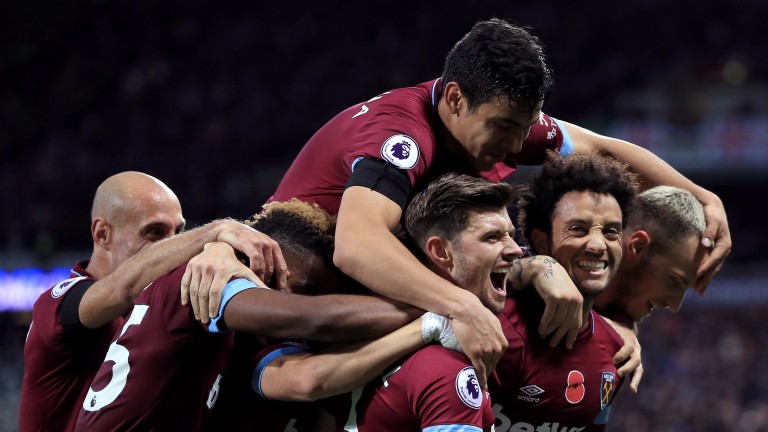 West Ham's brutal run of fixtures is over and they should be looking to climb the Premier League table. A trip to Huddersfield is potentially a perfect opportunity for them to follow up last week's win over Burnley at the London Stadium.

That success was the first time 13th-placed West Ham had played a team currently below them in the table and the Hammers were well worth their 4-2 victory with Felipe Anderson making his biggest impact of the season with a couple of goals.

Since the September international break they have won at Everton, beaten Manchester United at home and drawn with Chelsea, while they were so close to defeating Leicester with ten men at the King Power.

Declan Rice gives the team balance in midfield and their centre-back partnership of Fabian Balbuena and Issa Diop will be confident of a clean sheet against Huddersfield.

The Terriers landed their first win of the season on Monday, beating Fulham 1-0, but Town remain toothless in attack.

The fog on the Tyne will have been lifted by last week's first win of the season but Newcastle remain vulnerable, particularly with Jamaal Lascelles and Jonjo Shelvey rated injury doubts.

Newcastle were extremely fortunate to overcome Watford anyway, and Bournemouth can follow Leicester and Brighton's lead by winning away to the Toon.

Bournemouth will still be kicking themselves at losing to Manchester United last week after such an outstanding first-half performance when Eddie Howe's side showed so much attacking verve.

Callum Wilson leads the line excellently and David Brooks has stepped up superbly from the Sky Bet Championship.

With Nathan Ake leading them defensively this is a game where the Cherries can finish on top having already triumphed on the road at Watford, West Ham and Fulham.

Small margins have been deciding Hull's matches and they could lose out at Birmingham.

Just nine goals have been scored in Hull's last seven matches and their last two wins - 1-0 over Bolton and West Brom - should not be seen as a massive improvement for a side who had previously lost five of seven.

West Brom were missing key players and an early goal against toothless Bolton changed the complexion of the game.

Birmingham lost for the first time since August 22 last week, going down 3-1 to a classy Derby outfit. However, before that difficult trip to Pride Park Garry Monk's men had won four on the spin.

More away tickets have been sold than in the home end for this FA Cup first-round tie and the large visiting army could be celebrating a win over Walsall.

Coventry have lost only one of their last nine matches, during which time they have drawn with Sunderland and recorded away wins at Charlton, Southend and Bradford.

Walsall, seen as relegation good things by many ante-post, are heading in the wrong direction with four defeats in five matches and the last two, both at home, against Burton and Charlton were poor performances.

The Saddlers are low on confidence and short on experience with Joe Edwards and skipper Adam Chambers injured.

Banker
Napoli 8-15
Carlo Ancelotti's side are full of goals, thumping Udinese 3-0 on their last Serie A away day, and they should find the trip to out-of-form Genoa a piece of cake.

Blowout
Bradford 13-10
There are no easy FA Cup matches when you have lost seven on the trot and won only one of your last 15, so the trip to National League Aldershot looks tricky for the Bantams.

Gareth Southgate has defended his decision to hand Wayne Rooney a sentimental last England call-up to face USA and said: "He has earned the right to that cap over a period of over ten years and six major tournaments with England and as the record goalscorer."

Southgate then referenced something similar happening to Holland with Wesley Sneijder and Arjen Robben, plus Germany's Lukas Podolski, while David Silva is set to play a tiny role for Spain against Bosnia. However, all of those played in a World Cup final.

What exactly are we celebrating with Rooney? Why is he so much more deserving, than say, fellow cap centurion Ashley Cole?

Rooney was outstanding at Euro 2004 but was pretty hopeless in major tournaments for England after that.

England failed to qualify in 2008, he was sent off in 2006, had a pop at supporters after a dismal show in 2010, prepared for 2012 with an ill-advised trip to Las Vegas, was eliminated after two matches in 2014 and created his own midfield role at Euro 2016 which finished with the shambolic loss to Iceland.