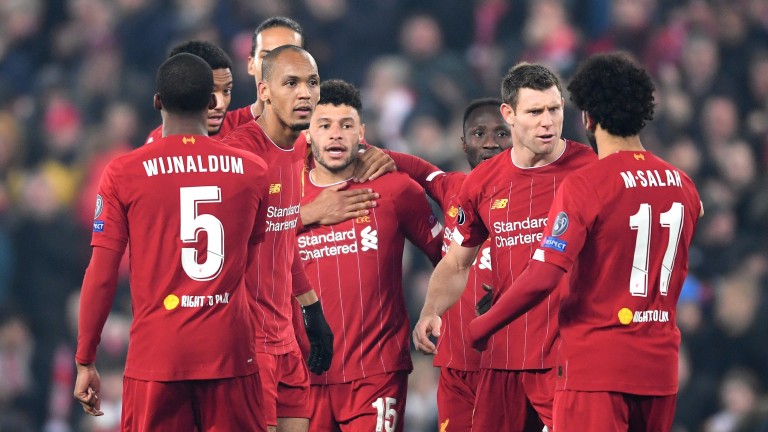 Liverpool are on course to win the Premier League title
Laurence Griffiths
1 of 1
By Mark Langdon UPDATED 3:55PM, DEC 20 2019

As the Premier League reaches it's half-way stage Mark Langdon looks at the title-race, the best bets and odds for a top-four finish and gives his free football tips.

Thirty years of hurt never stopped them dreaming and Liverpool's long wait to be crowned English champions for the first time since 1990 should come to an end in 2020.

Some bookmakers have already paid out on the Merseysiders, who have romped ten points clear of Leicester and, even more crucially, hold a 14-point advantage over ante-post favourites Manchester City.

Jurgen Klopp's outfit have scored fewer goals than City and conceded more than Leicester, but they have dropped just two points in a remarkable opening 17 matches of the campaign.

It will take something even more curious for them to throw it all away now as Klopp, who built a Borussia Dortmund side to take down the Bayern Munich machine in Germany, appears to have done the same with regards to breaking last season's domestic treble-winners City.

Winning last term's Champions League possibly gave Liverpool the final push they needed and the rampant Reds have different ways to hurt opponents whether it be through the attacking full-backs, pressing warriors in midfield or the individual quality of Sadio Mane and Mohamed Salah.

There have been some fortunate moments along the way, including a Dean Henderson howler that gifted Liverpool victory at Sheffield United and late winners at Aston Villa and Crystal Palace. However, most teams seem beaten at fortress Anfield before they even see the Kop.

Even those who come with a stronger mentality are out of luck. The last-second winner over Leicester, Heung-Min Son's miss when Tottenham led 1-0, the penalty shout for City against Trent Alexander-Arnold - it seems destiny is with Liverpool.

City are top of the expected points table, although those who expected them to land a hat-trick of titles are set to be caught out.

Pep Guardiola will wonder how his dominant outfit dropped points in 2-2 draws against Tottenham and Newcastle and he will also curse his fortune with injuries after Aymeric Laporte and Leroy Sane suffered long-term problems.

Despite those hard-luck stories City have also fallen below their usual standards at times, such as the 2-0 defeat to Wolves, the poor 3-2 reverse at Norwich and the dreadful opening 30 minutes in the recent 2-1 Manchester derby defeat to United.

Kevin De Bruyne has been brilliant, their defence less so and Guardiola may be tempted to go all-out for Champions League glory.

Leicester's likeable side recorded the most amazing result of the season when they smashed Southampton 9-0 away - and they hold a 13-point advantage over fifth-placed Spurs which suggests the Foxes will be returning to the Champions League next season.

Never say never - after all, the 5,000-1 Foxes upset the odds in one of the greatest giant-killing stories in history to become champions in 2016, but another title success is probably too much to ask.

A difficult Christmas will tell us more as they have a trip to the Etihad followed by Liverpool at home.

Brendan Rodgers' outfit would have gladly taken a top-four spot at the start of the season and for a bet it could be worth focusing on the race for Champions League qualification as United and Tottenham attempt to chase down Chelsea.

The best punt could be to take Chelsea to fall short, despite starting better than many anticipated under Frank Lampard.

Four defeats in five suggests they are gagging to spend in January following the end of their transfer ban, although it's a tricky time to bed in new players and not an easy market to enter anyway.

Spurs are best-placed to take advantage if Chelsea are unable to last the pace, having seemingly shrugged off their early-season woes under Mauricio Pochettino.

This isn't so much about Pochettino's replacement Jose Mourinho returning to his magic of yesteryear, rather that they have already been away to Liverpool, Leicester, City, United, Wolves and Arsenal.

Mourinho needs to sort out his midfield - something which could come from within should record signing Tanguy Ndombele ever get fully fit - but the front four of Lucas Moura, Son, Harry Kane and a rejuvenated Dele Alli gives Tottenham a fair shot of overhauling Chelsea.

That will come as soon as Sunday if Spurs beat their London rivals in the Mourinho derby at White Hart Lane.

United will fancy their chances of getting in the hunt, if only they can learn how to put away the weaker sides.

Ole Gunnar Solskjaer's team have taken more points (13) against the top five than they have the rest of the division (12).