Virgil van Dijk has been superb for Liverpool 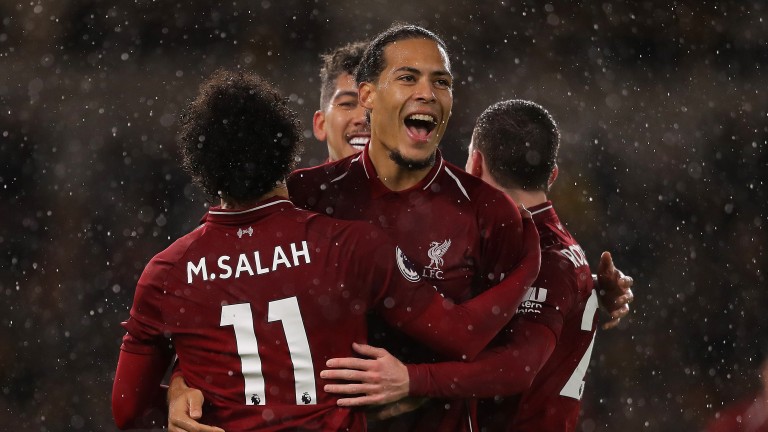 1 Title race almost 50-50
Bookmakers still believe Manchester City are Premier League title favourites but there is a case to be made for Liverpool having assumed that tag after the champions sensationally lost 3-2 at home to Crystal Palace.

Pep Guardiola will be hoping the return of Kevin De Bruyne and Sergio Aguero, who came off the bench against Palace after spells on the sidelines, can be the catalyst for City to try to claw back Liverpool's four-point advantage at the top.

However, City have almost forgotten how to defend in recent matches and have gone eight fixtures without a clean sheet. Not much could have been done to stop Andros Townsend's wonder strike but Kyle Walker is having a particularly tough time of it.

De Bruyne and Aguero should perk City up as an attacking unit, although Guardiola will be desperate to get Benjamin Mendy back as soon as possible.

With the injured left-back starting City's record is played 11, won nine and drawn two with only five goals conceded.

City have failed to win five of the 12 matches when Mendy has not started and unless Guardiola's team return to their best defensively, it could be argued that Liverpool should at the very least be seen as joint-favourites before the mouthwatering fixture between the top two in Manchester on Thursday, January 3.

2 Dutch defender a runner for Player of the Year
It's now 13 goals conceded for City compared to Liverpool's seven after another clean sheet in Friday's 2-0 success at Wolves.

Virgil van Dijk was once again an inspirational figure at the heart of the Reds defence and topped off the classy performance with his first Premier League goal for the Merseysiders.

There is plenty of hype around Van Dijk and Liverpool's number four could quite easily be in the Player of the Year picture, an award he is currently 4-1 to win having been 14-1 before the weekend.

John Terry in 2004-05 was the last defender to scoop the PFA honour but Van Dijk will have to go close if Liverpool finish first.

3 A United front under Solskjaer
It took no time at all for the feelgood factor to return to Manchester United in their first match under caretaker coach Ole Gunnar Solskjaer as the Red Devils romped to a 5-1 victory at Cardiff.

The fans loved the fluidity in attack and United were determined to play on the front foot as they dominated the statistics with 75 per cent possession as well as nine shots on target to Cardiff's three.

Whether Solskjaer has the tactical acumen to take the job long-term remains a mystery but given the talent in the team - at least in the forward department - this more positive approach should see United pick up comfortable points against the lesser lights.

Home games against Huddersfield and Bournemouth before 2019 offer the perfect chance to lift morale heading into the new year.

4 Fulham can keep a clean sheet
Claudio Ranieri has been working Fulham hard on the training ground trying to bring defensive organisation to the Cottagers and it seemed to work in Saturday's 0-0 draw at Newcastle.

The Magpies were restricted to no shots on target and four of Fulham's last five matches have now gone under 2.5 goals.

5 Hype looks right for Leeds superman Clarke
Leeds fans have been calling for 18-year-old Jack Clarke to start and he is still waiting for that opportunity. But the talented teenager certainly changed the game during United's stunning comeback to beat Aston Villa 3-2 in the Sky Bet Championship.

Clarke, who has been linked with a stack of Premier League clubs including Manchester City, danced through the Villa defence to start the fightback and should have an increasingly important role.