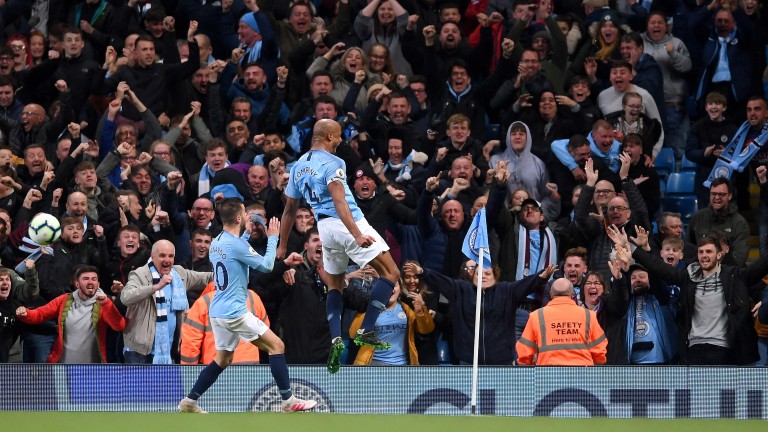 Vincent Kompany celebrates his goal for Man City
Laurence Griffiths
1 of 1
By Mark Langdon UPDATED 10:35AM, MAY 7 2019

Vincent Kompany scored the best goal of his life to keep Manchester City on course for the Premier League title as the champions beat Leicester 1-0 at the Etihad.

With 20 minutes remaining and the game deadlocked, skipper Kompany smashed a 25-yard thunderbolt past Kasper Schmeichel into the top corner to move Pep Guardiola's side one point above Liverpool with a final round of fixtures remaining.

City are 1-10 to retain the title with Liverpool at 13-2. The leaders will be crowned champions if they win at Brighton, while Liverpool can only hope to overcome Wolves at Anfield and pray Albion do them a favour.

This was far from a vintage performance from the 1-8 shots and they were nearly made to pay when former City striker Kelechi Iheanacho fluffed a late golden opportunity to equalise.

It had been a competitive first half with Leicester looking dangerous on the counter and neat in possession, largely keeping the hosts at bay at a nervy Etihad.

Sergio Aguero came closest to opening the scoring but his header hit the bar and at the half-time interval City had drifted to 4-11 for the title and Liverpool were 9-4.

The in-play match betting odds - City were also 4-11 for maximum points at the break - suggested they would eventually find a breakthrough.

That proved correct even if it was from the most unlikely source.