Saints could give Reds plenty of problems at St Mary's 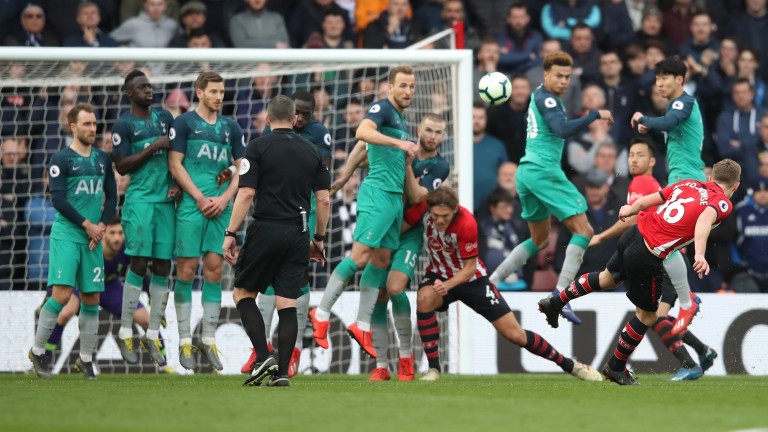 Toby Alderweireld's own goal handed Liverpool a dramatic 2-1 victory at home to Tottenham on Sunday but it may only have provided a brief respite for the Reds, who may fail to justify their short odds at Southampton.

Supporters and pundits have been poring over the top two's fixtures and Liverpool's home matches against Tottenham and Chelsea (April 14) have been widely identified as the crucial games for their title hopes.

Consequently, the victory over Spurs was greeted by wild celebrations, but there is a danger that the Southampton game may not receive the same attention and focus, increasing the chances of a surprise result.

Liverpool have had some close shaves against lesser teams in recent weeks.

Last month's home game against Burnley was in the balance until Sadio Mane's injury-time goal sealed a 4-2 success.

Their performance against Spurs was far from flawless and it could have cost them had the opposition made the most of three excellent counter-attacking opportunities in the final 20 minutes.

Liverpool got the important result and were widely praised for winning without playing well.

But teams can only ride their luck for so long and the Southampton match could see their fortune run out.

Saints are 16th and need one or two more victories to feel secure about their status for next season.

However, they have not played like a relegation-threatened side since Ralph Hasenhuttl arrived in December.

The Austrian inherited a side stuck in the relegation zone and low on confidence, having won just one of 15 Premier League games.

It was a daunting situation but Hasenhuttl wasted no time in implementing his positive, high-intensity brand of football and it has worked a treat with Saints collecting 24 points in 16 games.

That return is even more impressive as six of those games have been against big-six opposition.

Saints have competed well in all of them and achieved excellent results at home to Arsenal (3-2) and Tottenham (2-1) and away to Chelsea (0-0).

Against Liverpool their task is made more difficult by the ineligibility of on-loan Reds' striker Danny Ings, who returned from injury when starting in last Saturday's 1-0 victory at Brighton.

But other players rose to the challenge during his absence.

Right-back Yann Valery popped up with two goals in the last three games and James Ward-Prowse has netted six times since the turn of the year, earning himself a place in the recent England squad.

Southampton are playing as well as at any stage of the season and they will not be allowed to drop their standards for a fixture which their supporters always look forward to.

Liverpool have signed Southampton players on numerous occasions and will include Virgil van Dijk and Sadio Mane in their line-up.

Those transfer dealings mean there is an extra edge to the fixture and if Liverpool are not careful they could be on the wrong end of a hugely damaging result.

Team news
Southampton
Danny Ings is ineligible to face his parent club. Shane Long and Jannik Vestergaard (both groin) return to the squad.

Liverpool
Virgil van Dijk has trained normally and is expected to shrug off the knock he sustained towards the end of the victory over Tottenham. There are no fresh injuries.

Key stat
Southampton have lost only one of their last six home games.