Our team of experts answer this week's big betting questions 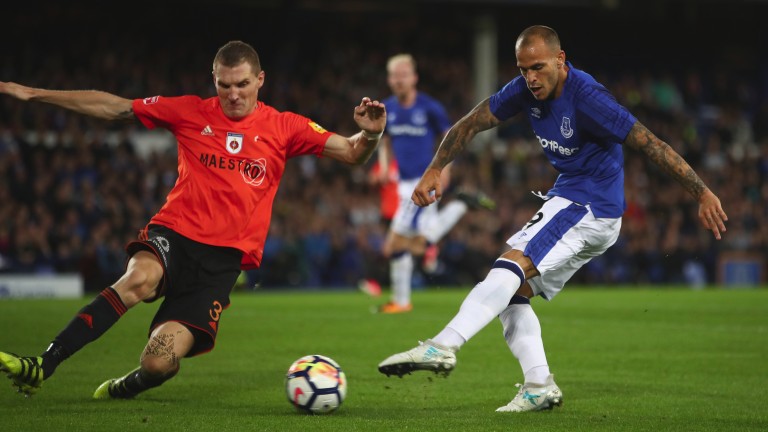 Didi Hamann Former Premier League star
Crystal Palace to beat Huddersfield. Palace did what they had to under Sam Allardyce to stay up but this is a team packed with attacking gems and I can see that under Frank de Boer the shackles are going to come off. Huddersfield might have regarded this as a nice, gentle welcome to the top flight but I fancy it’s going to be anything but.

Mike Holden Betting analyst
I like Chesterfield to win at Notts County. They’ve lost their first two matches but played Grimsby off the pitch for most of their 3-1 defeat last weekend, winning the shot count 30-11 with 61 per cent possession. I make the Magpies a bottom-half team and they went to extra-time and penalties in midweek.

Matt Ireland Racing Post Sport tipster
Aston Villa wilted under the weight of expectation last season and no aspect of their opening 1-1 draw with Hull made me think they had improved dramatically over the summer. I’m happy to take them on with Cardiff, who ended last season in stellar form and could surprise a few people this season, too.

Stephen McDonnell BoyleSports
Everton at home to Stoke. Ronald Koeman has bought very well and Goodison is always a tough place to visit. The Toffees can pile the misery on a poor-looking Stoke side with an easy victory. I think Stoke will struggle this season and wouldn’t be surprised if Mark Hughes was the first manager to get the chop.

James Milton Racing Post Sport tipster
Over 3.5 goals in Watford v Liverpool at 2-1. The bet copped in six of the Hornets’ home games against the top eight last season and they also lost 4-3 at Chelsea, 4-0 at Tottenham and 6-1 against today’s opponents at Anfield. The Reds scored four at Arsenal in their opening fixture of 2016-17 and another flying start looks likely this term.

Which favourites look most vulnerable?

Didi Hamann I wouldn’t want to take daft odds about Chelsea at home to anyone – and that includes Burnley. Sean Dyche’s men took points off Chelsea, Manchester United and Liverpool last season and no one rolled them over. It’s been a difficult summer for Chelsea and they come with no guarantees.

Mike Holden I’m happy to oppose Hull at the prices. Leonid Slutsky is short on numbers and hasn’t had long to get his ideas across, so the Tigers might lack the creativity needed to carve open stubborn Burton. The Brewers aren’t the sort of team who will sabotage their chances of nicking a point by chasing all three.

Matt Ireland Given the rumblings at Sunderland in pre-season I would have expected Derby to have shown more than they did at the Stadium of Light. The Rams are a hard-working unit under Gary Rowett but they lack the flair they possessed in previous seasons and look vulnerable to big-spending Wolves.

Stephen McDonnell Manchester United look too short. I was unconvinced by their Super Cup performance in midweek when they lacked creativity and pace and could find themselves frustrated against West Ham side. After spending heavily the pressure will be on from the start, especially after disappointing at home last season.

James Milton Mark Warburton will be determined to impress as he returns to Brentford as Nottingham Forest manager. Warburton is still getting to know his squad but wins over Millwall and Shrewsbury represent a solid start while Brentford lost at Sheffield United and were taken to extra-time by Wimbledon in the League Cup on Tuesday.

Who do you fancy to win the Premier League?

Didi Hamann I’ve been saying Manchester City for weeks and won’t change my mind, although there’s a real threat from United. The Manchester reverse forecast looks the bet. I can only see City improving. Money doesn’t always buy you the title but it’s got to help. But the signing of Nemanja Matic up the road has persuaded me that United are their biggest threat.

Mike Holden Manchester City will be the team to stop. They were dominant for most of last season and should go from strength to strength now Pep Guardiola has addressed the blindingly obvious. Those full backs aren’t just stop-gaps, either. They will give City an extra dimension as an attacking force. I also expect United to challenge.

Matt Ireland Manchester City have blown everyone out of the water in the transfer market this summer and that should pay dividends for Pep Guardiola. They’ve added pace and potency in the wide areas and while I don’t necessarily think they have the best defence, they definitely have the best attack which should be enough to see them home.

Stephen McDonnell Manchester City. After spending a fortune this summer, Pep Guardiola is finally assembling the type of squad he wants to compete on all fronts. There is the doubt that the team might not gel as quickly as he would expect but I can’t see anyone competing with City this year.

James Milton At the prices I’d go for Chelsea, although Antonio Conte is right to demand a couple of additional signings. The business they’ve done this summer has been solid and the squad has scope for improvement with likely starters such as Azpilicueta, Kante, Moses, Alonso, Hazard, Courtois and Morata all aged 27 or younger.

Which three teams will be relegated from the top flight?

Mike Holden On budget alone, I make Huddersfield and Burnley both odds-on and I also fear for Crystal Palace. They’ve taken a huge gamble in appointing Frank de Boer and changing their whole philosophy. Playing out from the back is risky in the Premier League. The Dutchman might have a job convincing his players to buy into it.

Matt Ireland Burnley have been woeful in 2017 and the sale of Andre Gray could be the final nail in their coffin. Huddersfield will no doubt fight valiantly but they appear to lack the quality to mix it in the big time and I fear for West Brom who appear to have stood still over the summer while their rivals have bolstered their ranks.

Stephen McDonnell Huddersfield, Brighton and Burnley. I think the market has it spot on and I feel the three favourites will all go down this year. I just can’t see Huddersfield and Brighton coping with the pressure of Premier League football every week and the loss of Michael Keane to Everton could prove costly for the Clarets.

James Milton Burnley had to cash in on Michael Keane and Andre Gray but their squad looks short of quality and visiting teams know what to expect at Turf Moor. Huddersfield will probably go down and there’s potential for a meltdown at Newcastle, who made hard work of winning the Sky Bet Championship and haven’t bolstered their squad enough.

If you owned Liverpool, would you sell Philippe Coutinho to Barcelona?

Didi Hamann If I had already identified players who could replace him, then yes, definitely. I don’t think he’s worth the money, but I can see Liverpool are under real pressure. They want the player to stay but if Barcelona come calling it’s a very hard club to resist. I wouldn’t blame Coutinho for going. There’s a fair bit of unrest around Anfield and this situation isn’t helping.

Mike Holden No. He’s only 25 and he’s got five years left on his contract, so they can keep him for at least one more season without his value depreciating, just like United did with Cristiano Ronaldo. I’m sure Klopp can cajole him into staying.

Matt Ireland No. If Liverpool did sell him it would say a lot about their ambitions to re-establish themselves as a force. Jurgen Klopp is moulding a dynamic side at Anfield but if he is to achieve any of the success he had at Dortmund, he must be allowed to keep hold of the beating heart of his side.

Stephen McDonnell There is no chance I would sell Coutinho to Barcelona, I think it is a bad move for a club like Liverpool as they let Luis Suarez, Raheem Sterling and Fernando Torres go in recent years. If they ever want to compete for league titles and Champions Leagues on a regular basis they need to stop selling their best players.

James Milton No, Liverpool are quite right to dig their heels in. Coutinho played a key role in getting them back into the Champions League and if they want to build on that achievement – and match Jurgen Klopp’s ambitions – then they need to keep him. You don’t want to be scrabbling around trying to replace one of your best players at this stage of the window.

Give us a winner on the midweek coupon

Didi Hamann Under 2.5 goals in Hoffenheim v Liverpool. The stakes are massive and I expect it to be edgy. This is a tough round for the big clubs to come in at – I remember the year we won it with Liverpool, in 2004-05, we played Graz over two legs and were hanging on at Anfield just to survive. Yet nine months later we were champions of Europe. Hoffenheim are a tough side who would take a 0-0.

Mike Holden I’ll plump for Wolves to win away at Hull, following the same reasoning that I outlined in question two. Nuno seems to have Wanderers well-organised and they can set up to frustrate. They’ve kept two clean sheets in their first two matches and carry enough individual threats to nick an important goal in any game.

Matt Ireland There’s a few both-teams-to-score wagers that make plenty of appeal but the one I’m strongest on in Leeds v Fulham. Judging by Leeds’ first two outings under Thomas Christiansen – they have scored seven goals – life isn’t going to dull while Fulham are arguably the best attacking team in the second tier.

Stephen McDonnell Liverpool at odds against look a good bet. Hoffenheim are a strong opposition but I think Jurgen Klopp will want to return to Anfield with an advantage and if Hoffenheim try to attack the Reds, they could leave themselves vulnerable defensively. This should allow Liverpool to counter- attack and with the pace of Sadio Mane and Mo Salah they should be dangerous.

James Milton Neil Warnock hasn’t had to wait long to face Sheffield United and the Cardiff boss should take the points against his beloved Blades on Tuesday. In all, 11 of Cardiff’s 17 Championship wins last season came at home and they’ve made a decent start to the campaign, nicking a victory at Burton and seeing off Portsmouth in the League Cup.