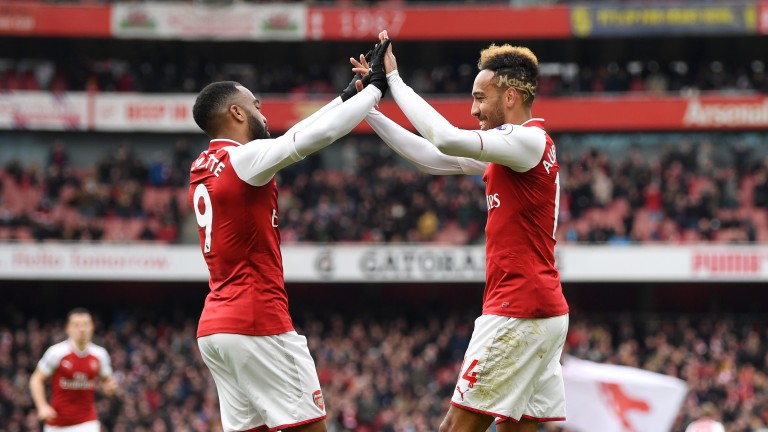 Pierre-Emerick Aubameyang and Alexandre Lacazette will be hoping to fire for Arsenal against Burnley
Shaun Botterill
1 of 1
By Dan Childs 8:00PM, MAY 11 2019

Arsenal triumphed 4-2 at Valencia on Thursday to seal a place in the Europa League final and they look decent-value favourites to topple Burnley at Turf Moor.

The Gunners have a slim mathematical chance of climbing into the top four and need a win at guarantee fifth place, ensuring they won't have to play Europa League qualifying matches in July.

Unai Emery is likely to select a strong team and that is bad news for Burnley, who were poor in their 2-0 loss at Everton.

Bet on this march at Soccerbase.com

Crystal Palace must do better at Selhurst Park if they are to push into the top half next season and they can set the right tone by defeating Bournemouth.

Bournemouth scraped a 1-0 win at home to nine-man Tottenham last Saturday but their performance was poor.

There was a lack of creativity without David Brooks, who remains sidelined, and rookie goalkeeper Mark Travers was forced to make several first-half saves.

Travers could be a busy man against Palace and he may struggle to keep another clean sheet.

Key stat
Bournemouth have lost 11 of their last 14 away matches.

Scott Parker has been handed the Fulham manager's job on a permanent basis and he can celebrate his appointment by masterminding a home win over Newcastle.

Fulham have put their trust in Parker after a dramatic recent improvement in performances and results.

The Cottagers wrapped up three successive wins in April and also put up stiff resistance in last Saturday's 1-0 loss at Wolves.

They can sign off with a victory over Newcastle, who are without five injured players.

Team news
Fulham
Marcus Bettinelli, Lazar Markovic and Timothy Fosu-Mensah are sidelined but there are no fresh injuries.

There will not be many occasions when Chelsea go off as outsiders to beat Leicester but there is no temptation to side with the Londoners at the King Power Stadium.

Chelsea scraped through to the Europa League final with a penalty shootout success over Eintracht Frankfurt on Thursday but their performance was far from convincing.

There will be a few tired legs in the camp and the short turnaround leaves the Blues vulnerable against a Leicester side who thumped Arsenal 3-0 in their last home game.

Ole Gunnar Solskjaer is in desperate need of a convincing victory to lift the spirits of Manchester United supporters and he could get his wish on the final weekend of the season.

Cardiff's players have given everything in their battle against the drop but it would be understandable if the workrate dropped in their first game since relegation to the Sky Bet Championship was confirmed.

Neil Warnock has spoken about United wasting money in the transfer market and there could be a reaction from the home side.

Key stat
Cardiff have lost four of their last five away games without scoring.

Ralph Hasenhuttl has done a great job steering Southampton to safety and he can send the fans away happy by securing a victory over Huddersfield.

Saints were well below par during last Saturday's 3-0 loss at West Ham and much of the blame lay with Hasenhuttl, who experimented with different personnel and a change in formation.

Hasenhuttl has promised to get back to basics this weekend and a strong Saints performance should see off the Terriers, who are 23 points worse off.

Huddersfield
Erik Durm has been ruled out and Chris Lowe and Mathias Jorgensen are injury doubts. Reserve keeper Joel Coleman will be given his first Premier League start.

Tottenham dug deep to reach the Champions League football but their recent Premier League performances have been dreadful and they look there for the taking this weakened.

Spurs were done a massive favour last Sunday when Arsenal drew 1-1 with Brighton and Manchester United drew 1-1 against Huddersfield.

A top-four finish is almost certain and that is just as well because they may be without up to eight players for a tricky clash against Everton, who are finishing the season with a flourish.

Everton
Andre Gomes returns from a ban but Richarlison (rib) and Dominic Calvert-Lewin are injured and Seamus Coleman (groin) is a doubt.

Watford have the FA Cup final to look forward to next Saturday and can head to Wembley on a high by beating West Ham at Vicarage Road.

The Hammers hope to secure a third successive victory for the first time this year but face a tougher test than last weekend, when they coasted to a 3-0 victory over an experimental Southampton line-up.

Watford were unlucky to lose 3-0 at Chelsea last Sunday but are at full-strength and can make amends for a three-game winless run.

West Ham
Robert Snodgrass returns from a ban and Declan Rice and Felipe Anderson have shaken off a virus.