Jonny Clayton should be too strong for inconsistent Gary Anderson 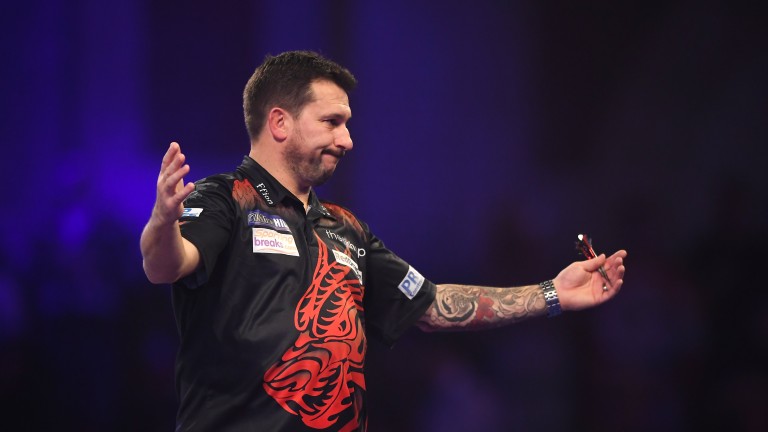 Darts fans are back and they are in for a treat when the Premier League's top two clash at the Marshall Arena in Milton Keynes on Monday.

Michael van Gerwen, the current league leader and 13-8 favourite for glory, takes us into the final week of competition in this year's tournament with a humdinger of a tussle with his closest challenger, Nathan Aspinall.

A crowd of close to 1,000, the first time fans have watched top-class arrers in this country since the opening night of the worlds in December, could not have asked for a better card on their return.

There are four rounds of league action to be completed over the next four nights with the top four staying put for the playoffs on Friday night.

Gary Anderson might need reminding what a crowd sounds like having gone 14 months without playing in front of one, but it will all come flooding back when 1,000 people cheer Jonny Clayton's winning double.

Clayton and Anderson are fifth and sixth in the table and it's the Welshman whose consistency gets him the vote here at 23-20.

Clayton has enjoyed a stellar 2021 with victory on debut at The Masters, two more floor wins, some dazzling averages and a 7-4 win over Anderson one of the highlights of his inaugural Premier League campaign.

Anderson did throw some magic arrers during the last three-day Premier League schedule at the start of the month but he remains a hard man to trust these days.

Jose de Sousa took his time to find his feet in his first Premier League campaign, but now he looks like he was born to play on the big stage.

The Portuguese Man O'Scores was in the elimination zone after five rounds of matches, but five wins and two draws in his last eight outings have sent the affable 180 machine into the top four.

He's beaten Van den Bergh once already in this campaign – he won 7-3 on Night Five with a 104 average – and clearly has the tools to do so again. But then writing off the magnificent Belgian is a dangerous game. The prices suggest a close call and they are probably about right.

Over/under 180s is set at 10.5, and again it's hard to quibble with. Van den Bergh is averaging 4.3 maxes per match, De Sousa a jaw-dropping 5.5. But both need to be firing for that mark to be breached and you can see why money has come for the unders.

The Green Machine came to life in the last round of games, shrugging off a fairly ordinary year by producing a three-night average of 104, three wins and a statement of intent 12 months after missing out on the playoffs altogether for the first time.

He's 5-6 here and that should tempt his loyal army of backers.

All three Premier League meetings between the two men have gone the distance and it would be no surprise if the same doesn't happen again. And if it's that close, I'm not sure odds-on the Dutchman appeals that much.

Peter Wright wasn't at the races in the last string of matches with off-board worries which very clearly affected his game.

The problem is that the three damaging defeats he suffered – including an 8-1 spanking by De Sousa – leaves him in a daren't-lose situation. James Wade's position is hardly much better and he too is a player who looks down on his luck at the moment.

The betting looks pretty level which would never have been the case before this tournament begun, yet Snakebite has won only two of his last eight showdowns against the left-hander. Neither man is easy to trust.

Take Wadey with a start in the 180s handicap. Each man pinged eight in that last trio of games earlier this month and if the Scot's still struggling, he's no good thing to out-max the Englishman.

FIRST PUBLISHED 1:45PM, MAY 23 2021
Peter Wright wasn't at the races in the last string of matches with off-board worries which very clearly affected his game