Pierre-Emerick Aubameyang sent off as Arsenal draw at Crystal Palace 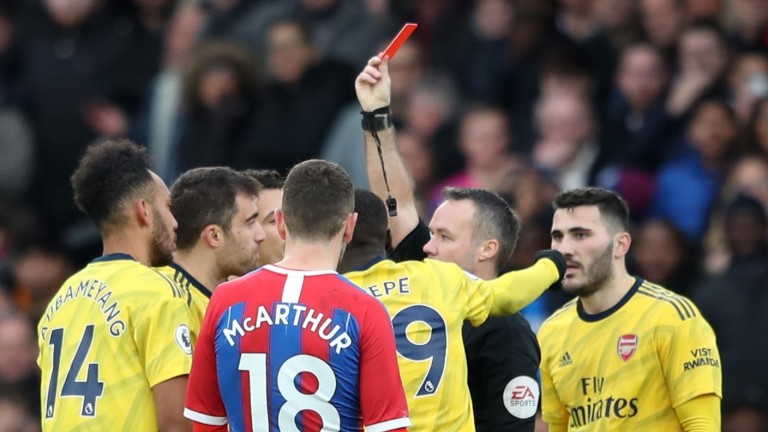 It proved to be a sweet Champions League final rematch for Liverpool as they moved 16 points clear at the top of the Premier League thanks to a 1-0 win at Tottenham.

Brazilian forward Roberto Firmino proved to the Merseysiders’ match-winner, scoring the only goal of the game in the first half.

Second-placed Leicester lost their second home league game of the season against Southampton.

Ralph Hasenhuttl's men ran out 2-1 winners thanks to goals from Stuart Armstrong and Danny Ings and are as big as 10-1 for relegation this season having been 6-4 when they lost the reverse fixture 9-0 in October.

The Midlands side are 1-10 to achieve a Champions League berth, but Arsenal are 11 points adrift of the top four following a 1-1 draw away to Crystal Palace.

The Gunners were cruising in the first half and took the lead through Pierre-Emerick Aubameyang but the complexion of the game changed after the Eagles equalised and the Gabonese forward received a straight red card for a dangerous challenge on Max Meyer.

Mikel Arteta's men are 14-1 to return to Europe's elite competition while bookmakers rate them 5-2 to make the top six with Wolves, 23-10, above them in that market despite being held 1-1 by Newcastle.

Everton eased the tension at Goodison Park with a 1-0 win over Brighton and there was a feel-good factor around Old Trafford as Manchester United spanked Norwich City 4-0.

Marcus Rashford bagged a brace on his 200th appearance for the Red Devils, who are 7-2 for the top four, while Norwich are now 1-9 to be playing in the Sky Bet Championship next season, sitting seven points off safety.