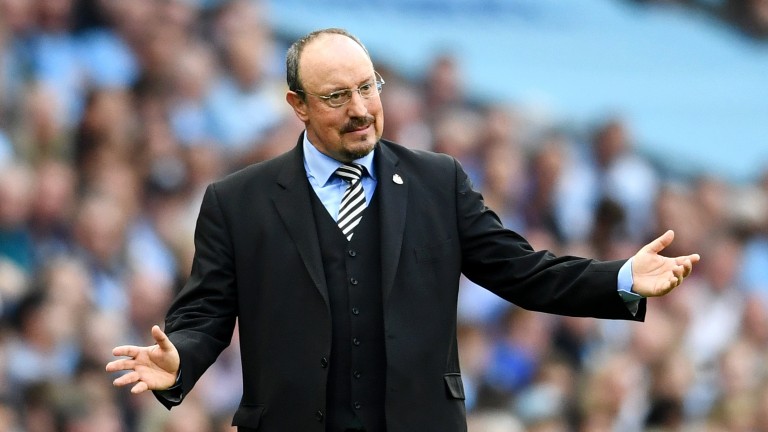 Magpies boss Rafa Benitez is cutting a frustrated figure at the moment
Getty Images
1 of 1
By Mark Langdon 8:00PM, JAN 28 2019

Newcastle boss Rafael Benitez cut a frustrated figure after his team were knocked out of the FA Cup on Saturday and his mood is unlikely to be improved by the visit of Manchester City.

Benitez is desperately struggling to bring in new faces to aid Newcastle's Premier League survival battle and they are set to be outclassed by the champions, who are long odds-on for maximum points.

There was a time when Benitez could go toe-to-toe with England's elite, although he is fighting a very different fight these days and damage limitation looks the most likely course of action against the champions.

"If you have top players you attack, but we need balance," said the Spaniard ahead of the City contest. "One point could make all the difference and goal difference is important for us."

Newcastle's goal difference of minus 12 is the best of the bottom six and may well be vital, so with that in mind a bet on City to win in a match featuring no more than three goals could make sense.

Benitez was criticised in some parts for Newcastle's tactics in last season's home game against City when they showed, according to the complainers, a lack of ambition when losing 1-0 to a first-half Raheem Sterling goal.

Newcastle, despite supposedly chasing the match, had just 22 per cent possession and led to City boss Pep Guardiola saying that "it is difficult to play when the other team doesn't want to play".

It would seem natural to expect Newcastle to set up in the same way - they have scored only 19 Premier League goals this season - and registered just one shot on target in Saturday's 2-0 FA Cup fourth-round loss to Watford.

City are arguably playing their best football of the season - they have won their last eight matches in all competitions - and a victory on Tyneside would at least temporarily claw Liverpool's Premier League advantage back down to one point.

Liverpool were the last side to score against City in a game the Merseysiders lost 2-1 and since then Guardiola's men have scored an astonishing 28 goals without reply.

However, 16 of those came in successive home matches against EFL opponents Rotherham and Burton, while Wolves were reduced to ten men after just 19 minutes in their 3-0 defeat.

Even though it finished 3-0 to City, Guardiola's side lacked penetration for large parts of their last Premier League outing at Huddersfield, while Burnley fielded a weakened side in Saturday's 5-0 FA Cup thumping at the Etihad.

Man City
Vincent Kompany is ruled out but Benjamin Mendy is "much better" according to Pep Guardiola.

Key stat
Newcastle have lost all eight matches against the Premier League's big six this season.