Man City can continue their title charge at the Etihad 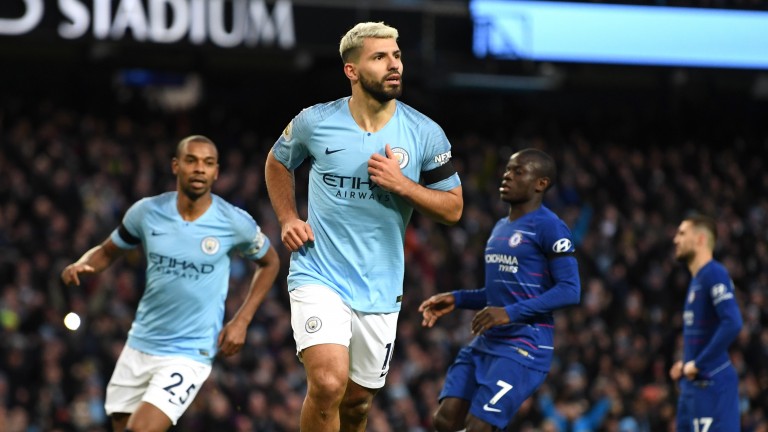 Manchester City have had to work hard to get back to the top of the Premier League but they can turn up the heat on Liverpool by beating Watford at the Etihad to go four points ahead.

City have been the chasers for almost three months but n ow they must handle a different kind of pressure as odds-on favourites to become the first team to win back-to-back titles since Manchester United in 2008-09.

Pep Guardiola was delighted with his players after last Saturday's 1-0 success at Bournemouth because they found a way of breaching a team who were fully focused on defending.

It should be a little easier for City to create openings against the Hornets, who tend to use the same personnel and the same 4-4-2 system whatever the opposition.

Watford went to Anfield recently with an unchanged team and were battered 5-0, but they responded with a gritty 2-1 triumph at home to Leicester last Sunday to keep them firmly in the hunt to finish seventh.

Anything Watford get at the Etihad would be seen as a huge bonus although they can take heart from their narrow 2-1 loss to City at Vicarage Road in December when they finished strongly.

Watford have scored in six of their nine matches against the big-six teams this season and should pose much more of a threat than Bournemouth did last weekend.

Troy Deeney tops the Watford scoring charts this season with eight league goals but Gerard Deulofeu could be their main dangerman because he has the pace to expose City's high press.

City went ultra-attacking after Kevin De Bruyne's injury at Bournemouth, bringing Riyad Mahrez on to play on the right and tucking Bernardo Silva alongside David Silva.

It left Ilkay Gundogan, better known for his passing than his tackling, as the only deep-lying midfielder but it didn't matter because Bournemouth were in such a defensive mode and found it difficult to change their approach.

Attacking City is easier said than done and it comes with huge risks and potential rewards attached.

Crystal Palace boss Roy Hodgson took the bold approach in December by selecting attacking trio Wilfried Zaha, Andros Townsend and Max Meyer and he was richly rewarded as the Eagles pulled off a stunning 3-2 victory.

But an attacking selection backfired horribly for Chelsea manager Maurizio Sarri, who watched his side lose 6-0 last month.

Watford boss Javi Gracia has been positive in the build-up to the game and seems to be preparing his side to have a go, which should at least deliver some entertainment for viewers, even if the vast majority of the action is focused around Ben Foster's goal.

It could be a tough evening for Foster, who has been outstanding since his arrival from West Brom last summer, but there is a strong possibility of Watford netting a consolation goal and following in the footsteps of eight other top-flight sides who have scored in league defeats at the Etihad this season.

Watford
Watford have a fully-fit squad with all 26 players in contention after Kiko Femenia recovered from a hamstring injury.

Key stat
Manchester City have conceded in eight of their 14 home league victories this season.