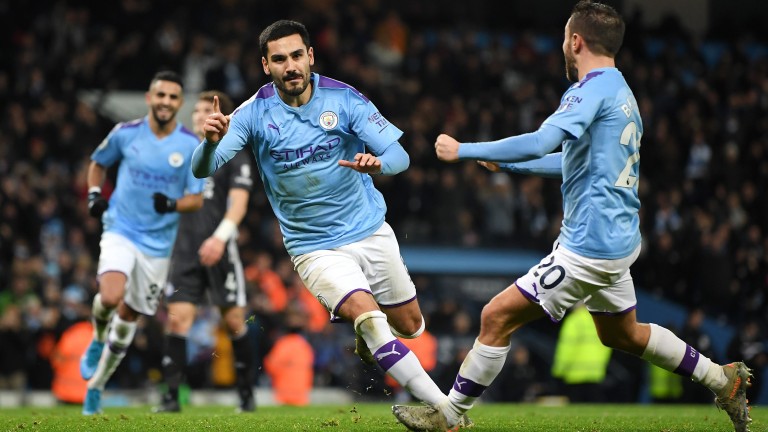 Manchester City moved to within a point of second-placed Leicester in the Premier League with a 3-1 home victory over the Foxes on Saturday.

Jamie Vardy, 7-1 to open the scoring, put Leicester ahead after 22 minutes but a deflected effort from former Fox Riyad Mahrez and an Ilkay Gundogan penalty put the hosts ahead before half-time. Gabriel Jesus scored the Citizens' third in the second half.

Paddy Power cut the champions from 7-1 to 6-1 to retain their title.

Liverpool, ten points ahead of Leicester and 11 in front of Man City with a game in hand, are 1-7 to take the Premier League title. The Reds won the Club World Cup on Saturday, beating Flamengo 1-0 after extra-time with a goal by Roberto Firmino.

Southampton have been pushed out to 9-5 from 7-4 for the drop after a swashbuckling display saw them thump relegation rivals Aston Villa 3-1.

Danny Ings, a 50-1 shot for the Premier League Golden Boot, bagged a brace either side of a Jack Stephens goal to move Saints out of the bottom three. The Villans have fallen into the drop zone and are 7-4 to be playing Sky Bet Championship football next season.

The trend of good first-half performances followed by disappointing second-half showings continued for Norwich, who are 1-5 favourites for relegation after relinquishing the lead to lose 2-1 at home to Wolves. Nuno's men are 5-1 to achieve a top-six berth.

Sheffield United are as short as 12-1 to make the top six after beating Brighton, while a late Miguel Almiron strike handed Newcastle victory over Crystal Palace. The Magpies have been eased to 13-2 to go down.

Everton and Arsenal, watched from the sidelines by their respective new managers Carlo Ancelotti and Mikel Arteta, played out a dismal 0-0 draw at Goodison Park.

The Gunners have been pushed out to 17-1 to finish in the Champions League places but Arteta is only 4-6 to win silverware during his time at the Emirates. Ancelotti is 3-1 to do the same at Everton.