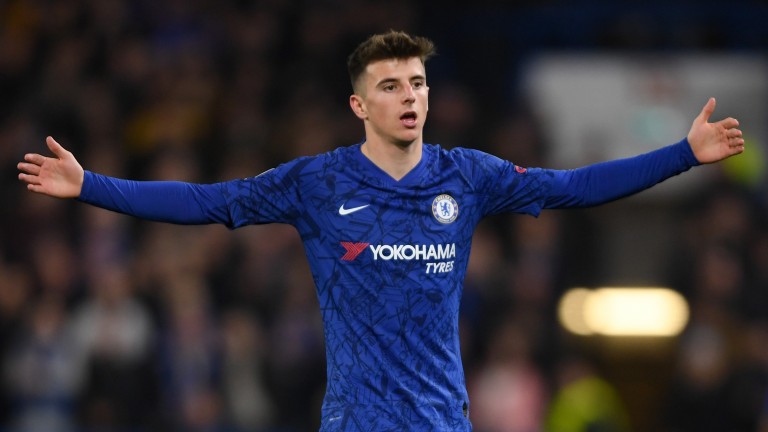 Chelsea midfielder Mason Mount could return for the visit of Bournemouth
Mike Hewitt
1 of 1
By Dan Childs UPDATED 9:34AM, DEC 14 2019

Newcastle draw no bet
1pt 15-8 Betfair, Paddy Power
Back this tip with bet365

Newcastle are up to 11th after successive victories and can climb into the top half for the first time this season by defeating Burnley at Turf Moor.

The Magpies have had to absorb some bad news with talented winger Allan Saint-Maximin facing a month on the sidelines.

But Jonjo Shelvey has scored in each of the last three games and could deliver another magical moment.

Burnley are physically strong and will look to load the penalty area at every opportunity but the Magpies' reliable defence can hold firm.

Newcastle have lost one of their last seven fixtures.

Chelsea
Fikayo Tomori (hip) is a doubt but Mason Mount could return after being rested in midweek.

Qualifying for the Champions League knockout stage was a major achievement for Chelsea and their week could get even better with a comfortable victory at home to Bournemouth.

Frank Lampard's side will not have to worry about European football again until February and they could do with refocusing on domestic matters, having lost three of their last four Premier League games.

However they should soon be in the ascendancy against injury-ravaged Bournemouth, who received a double blow last week with Callum Wilson and Nathan Ake added to their absentee list.

Leicester
Demerai Gray has fully recovered from illness and no fresh injuries are reported.

Norwich
Grant Hanley (groin and hernia) is back in training but Josip Drmic and Timm Klose remain sidelined.

Leicester are doing their best to keep the title race interesting- they ave won eight matches in a row and are unlikely to slip up against relegation-threatened Norwich.

However, the Foxes are not accustomed to winning home games at a canter and they could be made to work hard by the Canaries, who have been more competitive since key players returned from injury.

Norwich have not conceded more than two goals in an away match since the opening weekend of the season and they can keep the score respectable.

Sheffield United
Chris Wilder has a fully-fit squad but John Lundstram, George Baldock and John Fleck are one booking away from a suspension.

Aston Villa
Tyrone Mings (hamstring) is out but Matt Targett has shaken off a minor injury.

Aston Villa are the top scorers in the bottom half of the Premier League and their positive approach may help them to secure three points at Sheffield United.

Defeats away to Chelsea and at home to Leicester have dragged the Villans into the relegation mix but manager Dean Smith may feel his team have a better chance of picking up points at Bramall Lane.

Villa's talisman Jack Grealish has sparkled despite the recent downturn and he could make the difference against the Blades, who have lost five home matches this season.