Rob Cross and Daryl Gurney may struggle for maximum damage 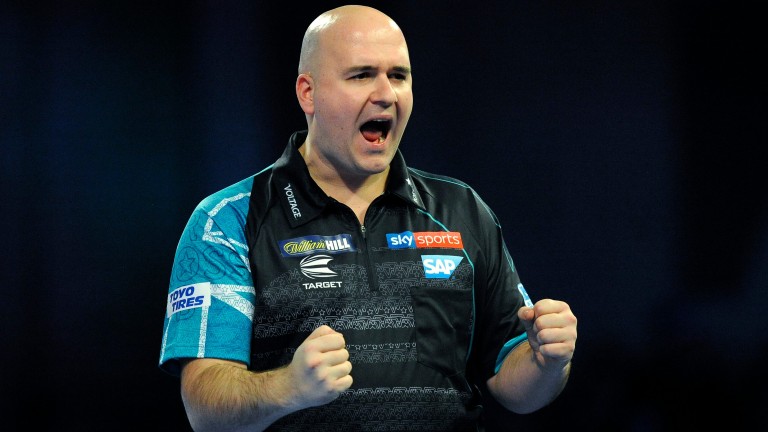 It’s part one of a West Country double-header with the Premier League stars doing battle in Exeter before heading up to Minehead to join the masses for this weekend’s Ladbrokes UK Open.

Kicking off proceedings at the Westpoint Arena are Rob Cross and Daryl Gurney, arguably the two most out-of-form players in the competition.

Voltage has lost two on the bounce to mirror a fairly unsatisfactory year all round. Gurney has yet to win at all and deserves to be the slight outsider.

Match prices look about right so have a look at the maximums and back under 5.5. Only six of the 20 completed Premier League matches have produced six or more 180s while Cross this year is averaging one every 3.98 legs, Gurney just one every 4.75.

Michael van Gerwen is the world number one, Peter Wright the world champ, but the world’s best player just now is without question Gerwyn Price.

The Welshman, the only unbeaten player in the tournament, is also the only player to have won two PDC titles in 2020 after going in at the Belgian Championship on Sunday.

He rightly merits odds-on status against Duzza, a player he battered 5-1 when they last met in the world quarters in December.

Nathan Aspinall is enjoying a spectacular Premier League debut and can warm up for the defence of his UK Open title by giving world champ Peter Wright a proper match.

The Asp looks completely at home on the Premier League stage and goes into action on the back of 7-5 wins over Van Gerwen and Durrant. He’s only off the top of the table on leg difference.

Granted, it’s still early days but Aspinall is merely confirming the promise and he can take Snakebite the distance.

Wright is majesty itself these days but he has lost his last three showdowns with Aspinall. The newcomer is hard to oppose, maybe with the draw no bet as a safety net.

Luke Humphries was the invited contender at Exeter 12 months ago and wowed the crowd with a 101-plus average in a thrilling draw against Gerwyn Price.

He’s back again but right now a pale shadow of that player and if The Flying Scotsman is anywhere near his best then Humphries is destined to fail. Indeed, 13 challengers have taken to the stage so far and not one has managed to pull off a win.

Cool Hand suffered a first-round exit in Belgium on Friday, averaging just under 83 in a loss to Ronny Huybrechts and he hasn’t got past the last 32 of any of the tour’s six floor events.

It's hard to see anything but a win for Anderson, who is odds-on. He’s worth chancing at 6-5 to hit most 180s. He has already nailed a competition-high 13 and is averaging one every 3.02 legs in 2020 compared to one every 3.46 for Humphries.

Michaels Smith and Van Gerwen renew hostilities just a few days after they met in the Belgium Championship, a match Bully Boy won 6-5.

He went on to reach the final to cap a productive few days after he hit a nine-darter against Daryl Gurney in last week’s Premier League.

Having said that, his performance against Gurney wasn’t great and he has lost all six Premier League showdowns with Van Gerwen. The Dutchman, however, is not throwing like a 4-7 shot at the moment.