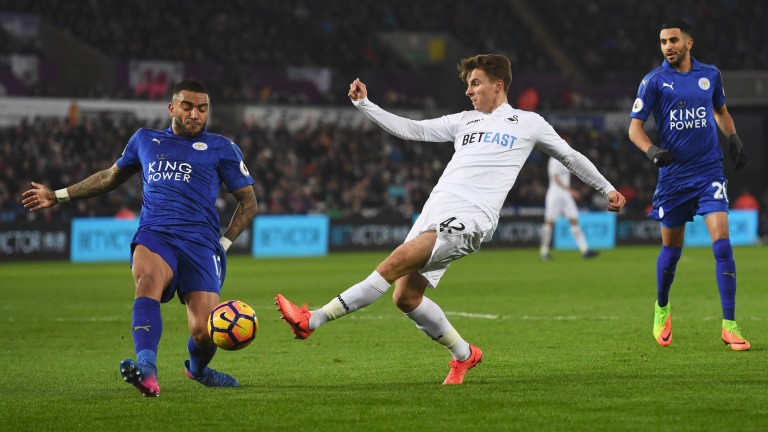 Two points separated six teams at the bottom of the Premier League before the weekend. The gap is now five points but could narrow again. Reading upward, the bottom six are Sunderland, Crystal Palace, Hull, Leicester, Middlesbrough and Swansea.

This season, as in other seasons, there is not much difference in ability between most teams in the Premier League. Differences in results between them owe little more to differences in skill than the outcome of a coin-tossing competition.

Some people get offended when I say this. To them it sounds like I am saying that matches between these teams are decided mostly by luck and hardly any skill is involved. I am saying one thing, but not the other.

A contest between them would be thrilling to watch, a never-to-be-forgotten example of how well that sport can be played. But the result would not be determined by a difference in skill – there is no difference in skill. It would come down to a moment of luck.

Skill can be the deciding factor only when competitors have different skills. 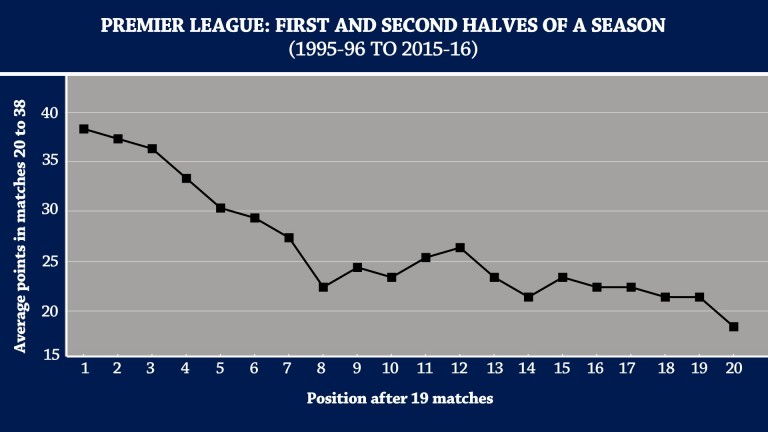 The first graph above illustrates why I believe that most seasons there is little difference in ability between most teams in the Premier League.

Some teams in last place were cut off and cast further adrift with every round of fixtures played – Aston Villa last season, for example, and Derby eight seasons earlier. For teams in positions eight to 19 after the first half of a season there was hardly any difference in average points gained in the second half of a season. 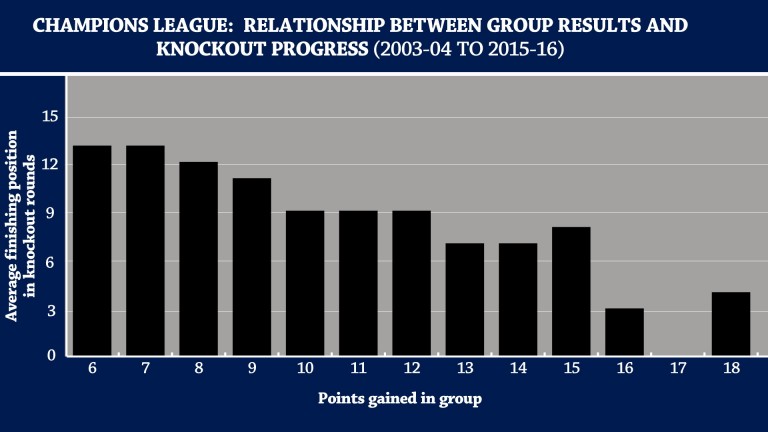 Champions League group results, perhaps surprisingly, give a reasonable indication of how well teams will do in the knockout rounds. I say perhaps surprisingly because a group consists of only six games, home and away to three opponents, who can vary widely in quality.

Nonetheless the better a team fare in their group the further they are likely to progress in the knockout rounds.

I looked at records in the group stage and knockout rounds from the last 13 Champions League seasons, all those since the present format was adopted.

To quantify progress in the knockout rounds I called winners 1, runners-up 2, beaten semi-finalists 3.5 (because they could be said to have finished third or fourth), beaten quarter-finalists 6.5 (halfway between fifth and eighth) and round-of-16 losers 12.5 (midway between ninth and 16th).

The more points a team gained in their group the further they were likely to progress in the knockout rounds, as you can see on the second graph above.

A big influence on achievement in the knockout rounds was whether a team qualified from their group in first place or second. In the round of 16, group winners play group runners-up (who tend to have qualified with fewer points and be weaker) and the second leg is at home.