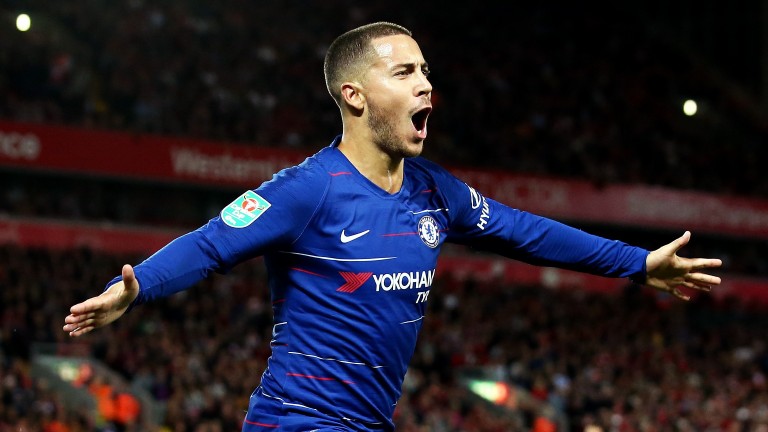 Cardiff’s wretched record against the big boys doesn't inspire confidence that they can either beat Chelsea or avoid the drop, but you can be sure that Neil Warnock’s side will go down scrapping.

The Bluebirds have lost all eight of their Premier League showdowns with the top six clubs, scoring just six goals and shipping 27.

Unfortunately for fans of the Welsh side, that means that four of their last eight games are against elite outfits, starting with a visit from a Chelsea side keen to make amends for the pre-break loss at Everton which saw them demoted to sixth place.

Cardiff aren’t terrible at home, where they have won six times. And Chelsea have been serial wobblers of late on their travels, losing five of their last eight road trips, all to nil.

But Maurizio Sarri’s men have won just over than twice as many games as their hosts and accrued just over twice as many points. They will surely boss the ball and a Cardiff defence that won't be at full strength face a real working over.

Chelsea, who came from behind to beat Cardiff 4-1 when they clashed at Stamford Bridge in September, can get up in a game with a few goals.

Back Chelsea to win and over 2.5 goals. Their five visits to the sides in the bottom six this season have yielded five wins, all with at least three goals scored.

These are the type of games where Eden Hazard and pals get to bully opponents. Hazard, in particular, is a massive threat who likes taking on Cardiff having bagged five in his last three appearances against them.

Neil Warnock saluted the Belgian ace in his press conference and he is playing as well as ever. Chelsea fans would love to see Callum Hudson-Odoi shoehorned into the side somehow, but it will be at Pedro’s expense rather than Hazard’s – if at all.

Hazard was outstanding for 45 minutes at Everton, where Chelsea should have been 4-0 up before half time. They missed some glorious chances, however, and paid the price as Everton ran out 2-0 winners.

Cardiff will offer a threat, chiefly from delivery of crosses and set-plays, though goalscoring is a problem. Only Huddersfield have mustered fewer goals this term.

This match is all about Chelsea, however. They will set the tempo and are likely to boast possession stats of 60 per cent and more. It’s all about how they use it against a back line that can creak.

Chelsea
Ruben Loftus-Cheek is a doubt after pulling out of England’s squad last week.

Key stat
Cardiff have lost all eight of their games against the top six this season.