Man City 1-8 to stay ahead of rivals Liverpool 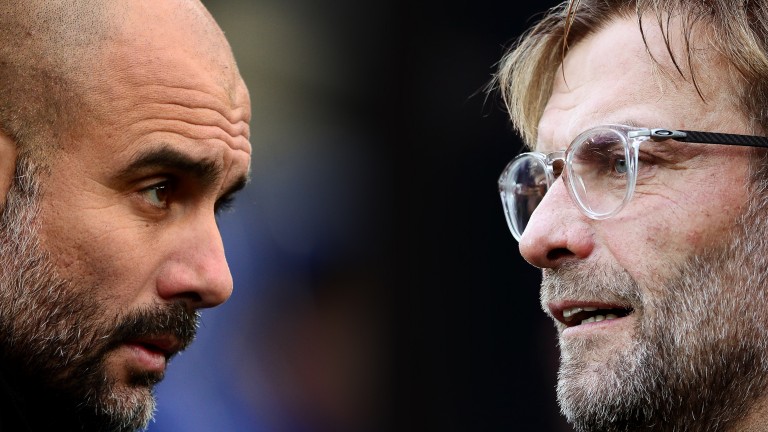 Pep Guardiola's Manchester City and Jurgen Klopp's Liverpool are once again tussling for the Premier League title
Getty Images
1 of 1
By Mark Langdon 6:00PM, MAY 11 2019

Liverpool would love to get into a position where they were able to turn the screw on Premier League leaders Manchester City and Hills make them 6-4 to top the table at any stage during the final day.

Manchester City, 1-8 title favourites, are one point clear of 13-2 Liverpool with a goal difference advantage of four and they will retain the title at Brighton as long as they at least match the result of the Reds, who host Wolves.

Liverpool have already won the Premier League handicap with most bookmakers but a Wolves victory would see a dead-heat split with Hills. Betfred's handicap sees Liverpool with 100 points, Wolves on 97 and Watford, who host West Ham, still runners on 98 points.

Mohamed Salah should return for Liverpool and can be backed at 1-3 to claim back-to-back Golden Boot awards. The 22-goal Egyptian is two goals clear of teammate Sadio Mane, City hotshot Sergio Aguero and Arsenal's Pierre-Emerick Aubameyang.

Arsenal have been clipped from 200-1 to 150-1 to claim a top-four finish as they end their domestic season at Burnley but Unai Emery's side have it all to do to jump above Champions League finalists Tottenham.

Spurs must lose at home to Everton and Arsenal then need to beat Burnley at Turf Moor while also making up eight goals to snatch a guaranteed Champions League spot from their neighbours.

FIRST PUBLISHED 6:00PM, MAY 11 2019
Liverpool have already won the Premier League handicap with most bookmakers