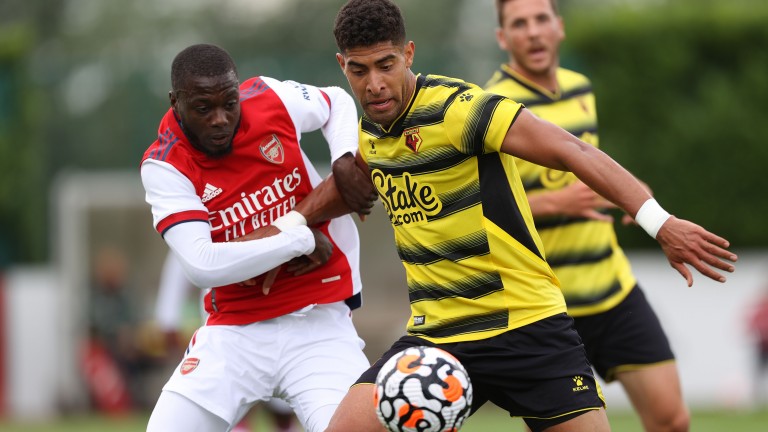 Watford could struggle to get to grips with life back in the Premier League
Charlotte Wilson/Offside
1 of 1
By Joe Casey 10:23PM, AUG 10 2021

The lowest-scoring Premier League team is a competitive market headed by the three newly-promoted teams. However in that trio, one side stands out from the rest.

Watford scored 63 goals in their 2020-21 promotion season, 12 fewer than Norwich's 75 and 16 behind Brentford’s 79. Five teams in the Championship outscored the Hornets last season and they had the lowest goal tally of any promoted team since Huddersfield went up at the end of the 2016-17 season.

Joao Pedro and Andre Gray primarily shared the load as central striker last season as Watford generally lined up in a 4-3-3. Between them the pair netted 14 times in 68 appearances.

Emmanuel Dennis, Ashley Fletcher and Josh King have been signed as reinforcements and Troy Deeney, Stipe Perica and Isaac Success are likely to resume their bit-part roles of last year.

King’s form from last year leaves plenty to be desired as he failed to score in 23 games in stints with Bournemouth in the Championship and Everton in the Premier League.

In the case of their primary rivals in the market, Brentford have a clear number one striker in Ivan Toney who scored 31 goals last season and Teemu Pukki, who scored 26 goals last year, will lead the line for Norwich.

The worry for Watford is that with eight senior strikers on the books, the Hertfordshire side could have quantity over quality.

Another side who look overpriced in the lowest scorers market is Burnley. Sean Dyche’s men finished 17th last season and only Fulham and Sheffield United netted fewer than their 33 goals.

Dyche made it clear on a number of occasions in the last campaign that he was unhappy with his playing squad and progress to improve it has been slow in this transfer window.

A controversial takeover of the club was completed in December and the new American owners have declared that spending levels will not be massively increased.

Winger Dwight McNeil was the key creative force in the side last year as he notched the most assists with five. The 21-year-old has been consistently linked with a move away from Turf Moor and if he were to go it would leave a major hole in their squad.

Outside of Chris Wood and Matej Vydra, no Burnley player scored more than three goals last season and if they don’t spread the load more evenly 8-1 could underestimate their chances of being lowest scorers.

West Ham enjoyed their best campaign in a long time last term, finishing sixth after being in contention for a Champions League place for much of the season.

However, with the Europa League to worry about this time around, the Hammers could be the latest in a long line of sides whose Premier League campaign is disrupted by European football.

David Moyes’s side built their success on the second best home record behind Manchester City and it is unclear what effect the return of fans will have on them.

Only Burnley and Crystal Palace had an older average age among their squad than the Hammers last season and, while Moyes will be looking to the transfer market to refresh an ageing side, support has not been immediately forthcoming.

Jesse Lingard was one of the stories of last season, but his fine form has put him back into Manchester United first team contention and the Hammers will have to replace a player who contributed nine goals and five assists in just 16 games.

After the sale of Sebastian Haller, the depth behind Michail Antonio in the attacking positions also looks weak.

Aside from last season, the Irons have finished in the bottom half in seven of their last ten Premier League seasons and came tenth when they claimed two of those three top-half finishes.

Despite being one of the fairytale stories of last year, West Ham will be stretched by their European endeavours and even-money looks a fair bet about a bottom-half finish next season.