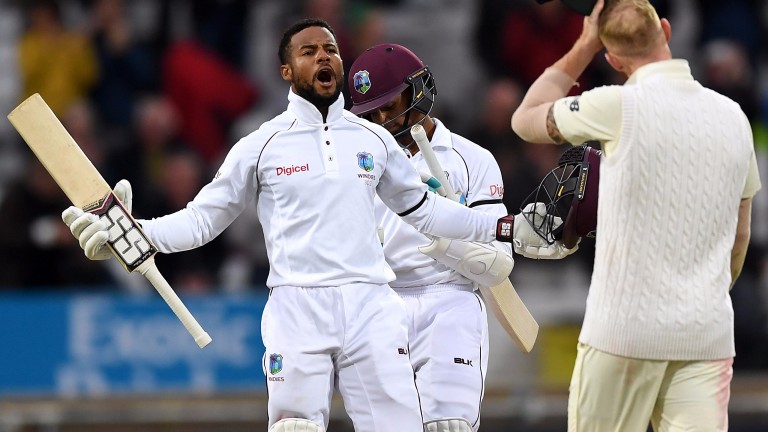 When I was a kid Liverpool owned football and the West Indies owned cricket. That may sound odd to anyone under the age of 35 who has no concept of either of those once mighty teams sweeping aside everyone who dared stand in their way, but it’s how it was.

That’s not how it is, of course. Liverpool have not won the title since 1990, and the Windies’ decline really started to bite a few years later and has basically never halted.

Until, that is, on Tuesday, when they pulled off a heroic, unlikely and heartwarming success in the second test against England at Headingley.

It was an outcome that delighted everyone except the most patriotic Barmy Army member. The statisticians liked it because it created one of the most remarkable sporting facts I have heard in ages - that Shai Hope became the first player in 127 years of first class cricket at the Leeds venue to score two centuries in the same match.

And those of us who feel the sport has not been the same since the demise of Caribbean cricket were given a pleasing shot of nostalgia as the men in the maroon caps defied odds of 16-1 to stun England so soon after having been battered by them at Edgbaston.

What makes the victory more commendable is that the pool of players coach Stuart Law has to work with is so much smaller than it would be if many of the current stars of West Indies cricket were to make themselves selectable for Tests rather than target T20 riches.

Gayle, Taylor, Russell, the two Bravos, Pollard, Narine, Samuels, Ramdin and Sammy were all unavailable, and while most of them are better in the limited overs field, their absence weakens the five-day team considerably.

What happened at Headingley is unlikely to spark a revival that will return the Windies to their former vicious, fearsome pomp, when their batsmen smashed bowlers to all parts and their bowlers smashed batsmen to smithereens, but it was marvellous nonetheless.

It was also tremendous to see Joe Root do what his predecessor Alastair Cook consistently failed to do and make a bold declaration. It was noticeable how many more Twitter users criticised his decision after England has lost than when he ended his team’s second innings the previous evening, and the after-timers even managed to get it wrong after the event.

Root made the right decision even though the outcome was wrong, a statement that will invite ridicule from some but is true all the same.

England’s odds of winning shortened after the declaration, and it is hoped he will continue to try to win Tests rather than not lose them when faced with similar situations again, although the misguided admonishments of those who somehow want five-day sporting events not to have a winner may temper his intrepidity in future.

It is not known whether betting market information is used as a factor in when to declare - I strongly suspect not - but I would hope it is given more priority than one of these outcome predictors that Sky uses that those of us familiar with odds tend to view with scepticism.

The latest fad is WinViz, which follows on from Wasp and a short-lived rugby league tool called Margin Meter that made even a clown like me look shrewd. They all use data to churn out a predicted win percentage, but it is fair to say their creators are wise not to offer prices on the strength of their forecasts.

At one point on Wednesday, for instance, with the Windies going along nicely on 129-2 they were given a WinViz chance of victory of one per cent, which is absurd given they were actually around 3-1 to pull off the win.

Sky would be far better off creating something that uses current odds. It would be a piece of cake to create the win percentages and they would brand it SkyChance or something, or even get it sponsored (or powered probably) by a bookmaker. It could be used for every sport they cover and would be far more credible.

Meanwhile, Test cricket, the decline of which has not been helped by the Windies’ slump over the last two decades, is suddenly looking interesting again with the decider coming up at Lord’s next week and an Ashes clash Down Under looming.

And at the rate they are going, if the West Indies can roll back the years, we might just see Liverpool’s even longer exile at the top come to an end this season.

The latest attempt to sex up sectional times took place last week when Sky Bet offered its customers the chance to bet on which horse would run the fastest furlong and which would clock the highest speed during a race at Windsor.

It was an interesting project and one that is set to be repeated in one of the sprints at the St Leger meeting next month, but it remains to be seen whether British and Irish punters will ever finally do what their American counterparts did early in the last century and embrace sectional times as a genuinely useful punting aid.

I am told the Windsor experiment did not exactly match Mayweather v McGregor in terms of turnover, and while that will not surprise anybody it is difficult to see split-times markets gaining huge traction.

It is possible that as technology advances it will be possible to let punters know far more quickly who hit the fastest speed and who recorded the most rapid furlong, but it is never going to be obvious to the naked eye and therefore this is likely to be a strictly niche betting medium.

And it should not be forgotten that a fastest furlong market is open to abuse. Connections of a horse might choose to go hell for leather in, say, the third furlong in order to collect bets without worrying where their runner finishes.

Clearly, bookmakers’ risk management systems are so sensitive these days that any unusually high demand for a particular horse is going to stick out like a sore thumb and set alarm bells ringing, but it is a theoretical risk all the same.

The tracking of horses in a race is not without potential use. I would like to see how much further than the advertised distance each horse covers and it would also be interesting to see how much time jumpers lose at the obstacles if the timing equipment was sophisticated enough.

But until someone is able to produce an easily digestible document that clearly and concisely explains how sectional times can help someone bet more successfully I remain doubtful they will ever become an essential component of the average punter’s armoury.

Reasons for failure are plain to see

There were two great examples at the weekend of people looking far too hard for a narrative that is something other than the dull truth that some things just happen.

First we had the notion that Crystal Palace are struggling with no wins and no goals from three matches because new manager Frank de Boer is attempting to get his players to pass the ball out from the back rather than lump it upfield.

That may be an explanation that sounds smart when tweeted or expressed in the pub, but the reality is the Eagles have conceded stupid goals through pathetic, mistake-strewn defending, which has nothing to do with formations or offensive strategy.

They lost to Chelsea because Hugo Lloris made a terrible error and then squandered a lead against Burnley after missing a host of great chances to make the game safe. This is not down to a hoodoo, a curse or any other non-existent medieval notion.

Tottenham’s superior quality will translate into victories soon enough and Palace will make fewer mistakes and will see improved results as a consequence.

That’s not a very dramatic, exciting, explicable state of affairs but unfortunately some things do just happen.