Pragmatic Swafford can bounce back from late Saturday setbacks 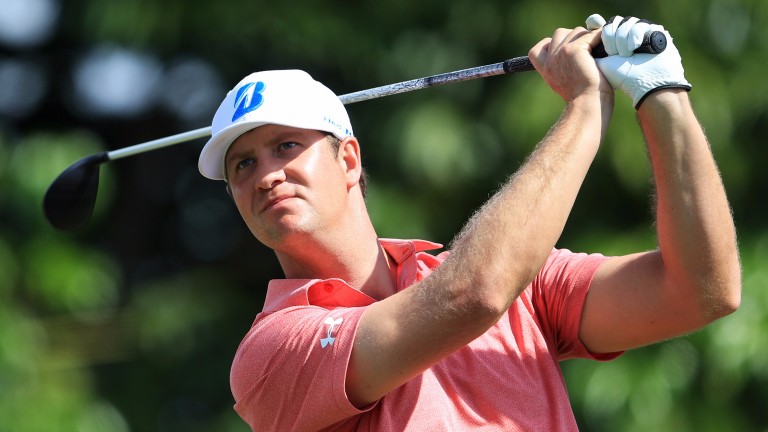 Story so far
Hudson Swafford was in control of the CareerBuilder Challenge as he approached the close of his third round at the Stadium Course, La Quinta, California, but three drop-shots over the final three holes meant he lost his grip.

Swafford wasted a perfect drive at the par-five 16th hole, pulling his approach into the deep greenside bunker and taking another five shots from there. A bogey at the 17th was followed by a par at the last, before a buzzing Adam Hadwin charged past him.

Hadwin carded the second 59 of the US Tour season, a wonderful 13-under-par effort at La Quinta Country Club in the three-course CareerBuilder. The Canadian made 13 birdies, needing ten shots fewer than he did the previous day.

Hadwin, 80-1 ante-post, will join the rest of the cut-makers at the Stadium Course for the final round. Hadwin has taken over from Swafford as favourite, leading by a shot and topping the market at 7-2. Phil Mickelson, sharing 21st place and eight shots behind, is a 150-1 chance.

The action resumes at 3.30pm UK and Ireland time, with the final threeball of Hadwin, Swafford and Dominic Bozzelli boarding the tee at 5.40pm.

Final-round advice
Hudson Swafford supporters had every right to be tearing their hair out over the closing stages of round three, but the man himself took his setbacks in commendable fashion and he still has every chance of landing a maiden US Tour victory.

A three-putt at the 16th hole for double-bogey took Swafford out of the lead, but in post-round interviews the 29-year-old wanted to talk about nothing apart from his brilliant golf up to that point. He remains full of confidence after excelling in the first 51 holes of the tournament.

Swafford spent some time in the Californian desert at the start of the year, tuning up for the season in the conditions he would face in the CareerBuilder, and practice has made almost perfect. He has started his campaign driving the ball supremely well and that long-game assurance will stand him in good stead at the tricky Stadium Course today.

The punishment for loose shots at the Stadium Course is often a double-bogey, as Jamie Lovemark found to his cost when contending for this title 12 months ago, and Swafford's tee-to-green solidity gives him a golden opportunity of a breakthrough victory if he can maintain his positive outlook.

Adam Hadwin has the task of following up a super-low round with one good enough to secure the trophy. Can he follow up his La Quinta Country Club fireworks on the more difficult Stadium track?

Hadwin was sixth in this event last year and clearly loves the assignment. Winning a maiden US Tour title from the front is a daunting challenge, though, and he has been unimpressive when previously in contention. Loose approach shots are often a weakness, something which is always costly at the Stadium Course.

Dominic Bozzelli has putted well to put himself in position to challenge for a maiden title, but the 25-year-old Web.com Tour graduate is unconvincing from tee to green. Expect the rookie to hit the self-destruct button at some point.

Brian Harman and Chad Campbell are the only US Tour champions in the top six, but Harman has won only one low-grade event (2014 John Deere Classic) and Campbell has not triumphed since the 2007 Viking Classic. These facts underline how wide-open the CareerBuilder is with 18 holes to play. Anyone 13 under par or better is bang in contention.

Swafford was an ante-post 66-1 Racing Post Sport selection and hopes remain high this sweet ball-striker can get over the line in front. Lessons will have been learned from yesterday – don't go left at 16 being the main one – and his attitude looks spot-on.

Charles Howell has started the season in excellent nick and the consistent US Tour performer looks a solid final-round threeball option against Martin Laird and Anirban Lahiri in the 5pm match.

Bill Haas, two-time winner of this tournament and all-time career money-leader at La Quinta, is a generous even-money to account for Seamus Power and JJ Spaun in their 3.40pm contest.