Powerhouses could prevail at Quail Hollow 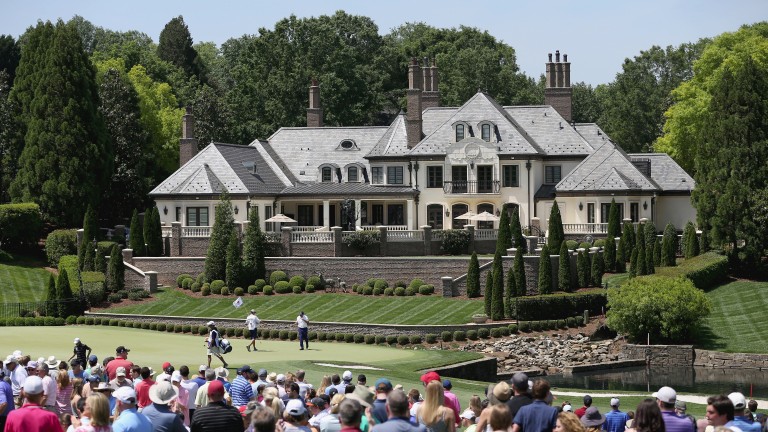 Hole 1 524 yards, par 4
The hole has been lengthened to incorporate elements of what were the first and second holes. Drives will aim at the point of the dogleg to the left and allow a mid-iron into the green, which is protected by three bunkers.

Hole 2 452 yards, par 4
The fairway turns some 280 yards from the green, which will see players attempt to find the elevated putting surface with a mid-iron. The green slopes from back to front.

Hole 3 483 yards, par 4
A long accurate tee shot is required to avoid the trees on both sides of the fairway. The small green is protected by three bunkers and a small ridge separates the front from the back.

Hole 4 184 yards, par 3
Part of the land used was previously the par-five fifth hole. A large undulating green is surrounded by three bunkers and going long will present a difficult up-and-down.

Hole 5 449 yards, par 4
The fairway is protected by bunkers on either side so drives will have to be well-placed to enable a comfortable approach on this slight dogleg. Avoiding the front bunker before the narrow green will be key.

Hole 6 249 yards, par 3
The longest par-three on the course plays downhill and many players are likely to opt for a hybrid or a long iron. The green slopes from back to front and contains plenty of thought-provoking contours.

Hole 7 546 yards, par 5
Most players will be looking to reach the course's shortest par five in two shots. The drive is tight, however, with bunkers to be avoided on the left and a creek that flows down the whole of the right side. The green could still be difficult to hit as it is tucked behind water and is surrounded by bunkers.

Hole 8 346 yards, par 4
The green could be in range for some but others will need to play a wedge from the sloped fairway. The hole was elevated by more than ten feet in a 2013 redesign and the green was rebuilt with softer contours.

Hole 9 505 yards, par 4
This could prove to be one of the toughest holes of the week. The bunker on the right comes into play off the tee and it will still take a fair clump to reach the green from there. Two front bunkers guard the medium-sized green.

Hole 10 592 yards, par 5
It will take a 300-yard drive over the bunker on the left to give players a decent chance of reaching the green in two. the green slopes not only from back to front but also from right to left, which can cause a host of problems.

Hole 11 462 yards, par 4
The hole was lengthened by 40 yards during the most recent renovations. Two large bunkers are waiting to gobble up drives of those looking to cut the corner on the left and deep bunkers to the left of the green will also have to be avoided.

Hole 12 456 yards, par 4
A left-to-right tee shot will be required to find the narrow fairway and a sloping green can cause further problems. It will be no surprise to see plenty of bogeys.

Hole 13 208 yards, par 3
Splitting the two bunkers with a mid-iron looks a passport to success, but there will still be work to do on a green that slopes from back to front as the customary contours will have to be negotiated again.

Hole 14 344 yards, par 4
Another driveable par four, but danger lurks on the left with bunkers and water coming into play. Some may opt for the safer long iron-wedge approach on a hilly hole that will have to be thought out.

Hole 15 577 yards, par 5
The final par five plays uphill after the tee shot and the water on either side should not come into play for the top players. A ridge runs down the middle of the green so an accurate approach should be key.

Hole 16 506 yards, par 4
The green was moved 80 yards to the left during the 2013 redesign and it sits on the edge of the lake. The dogleg right requires an accurate tee shot. Just don't go left with the approach because the water is waiting.

Hole 17 223 yards, par 3
Drama looks almost guaranteed at the course's signature hole. A 195-yard carry is required over water to find the green, but this can be altered if front tees are used. A variety of hole locations can be used to deliver the excitement.

Hole 18 494 yards, par 4
A creek meanders along the left side of the fairway and a bunker is on the right to punish any inaccuracy. An uphill second shot must avoid traps on both sides of the green, which is deep and sloped.