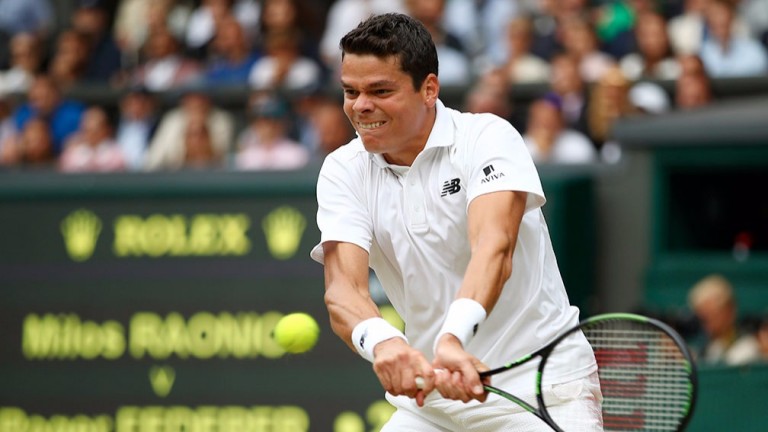 Milos Raonic has the power and weapons to trouble Dominic Thiem
Getty Images
1 of 1
By Aaron Ashley 7:26PM, NOV 16 2016

Novak Djokovic has already guaranteed his place in the last four at the ATP World Tour Finals and all eyes will be on his two Ivan Lendl Group victims – Milos Raonic and Dominic Thiem – as they tussle to join the world number two in this weekend’s semi-finals.

Raonic or Thiem – who both cruised past the unpredictable Gael Monfils to record their sole wins in this year’s London showpiece – will reach the last four with victory today and could get their chance at stifling Andy Murray’s world number one status.

Big-serving Raonic was on the wrong end of two gripping tie-breaks against Djokovic and lost in straight sets, while debutant Thiem found the fired-up Serb too determined and markedly too good.

The pair now prepare for arguably the biggest match of their season, with winning the only interest, and bookmakers make the Canadian a strong 4-9 favourite.

However, it could be worth chancing that Raonic gets the job done a shade cosily, as was the case when he eased past Thiem in straight sets on their most recent outing.

Thiem managed to take a set from a fragile Djokovic in his opener, but the Austrian’s inexperience in the event proved costly and, after losing 12 of the last 14 games, could be vulnerable to Raonic’s firepower and imposing first serve.

In the afternoon match, Djokovic bids to complete his unbeaten round-robin record at the O2 with victory against Monfils but there is still an element of doubt surrounding the Serb’s current game and his opponent appeals on the handicap with a 4.5-game start.

Monfils is yet to defeat the former world number one but it’s possible Djokovic could be saving himself for the bigger things that wait for him this weekend.

Andy Murray strengthened his credentials as world number one by clawing his way back from a set down to beat Kei Nishikori.