Positive Swans may play their part in thriller 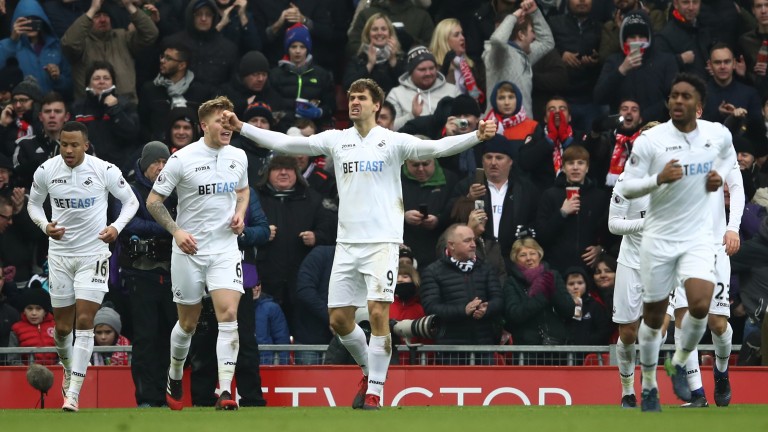 Manchester City's last three Premier League matches have encapsulated their campaign, with a 4-0 defeat at Everton followed by a brilliant yet flawed display against Tottenham and a slick demolition of West Ham.

An embryonic front three of Leroy Sane, Raheem Sterling and Gabriel Jesus ran the Hammers ragged on Wednesday night and Pep Guardiola may choose to unleash the pacy trio against Swansea, keeping Sergio Aguero as a handy impact substitute.

Yet for all City’s brilliance in east London, they cannot be regarded as certainties at 2-9 against a Swansea side who seem to relish high-profile fixtures.

Guardiola’s charges were sensational against Spurs yet let slip a 2-0 lead late on and they have kept only two clean sheets in 11 home league matches.

If they play as they did against Tottenham and West Ham, then Swansea’s defenders will be in deep trouble but the visitors also pose an attacking threat and the best bet may be over 3.5 goals at 11-10.

That would have copped in seven of Swansea’s eight games against top-six teams this term and the only exception was a 2-1 home defeat to Liverpool in October.

New manager Paul Clement helped them avenge that defeat with a shock 3-2 win at Anfield on January 21 and they followed that up with a 2-1 home win over Southampton.

The Swans look ill-equipped to sit back and soak up pressure so a positive approach is expected with pace down the flanks and the in-form Gylfi Sigurdsson pushing on to support striker Fernando Llorente.

Of course, there is inherent danger in such a bold plan as City have scored in all 15 home league and cup games, also showcasing their attacking class in recent

With confident attackers on both sides – and two suspect defensive units – an entertaining clash looks likely and the Swans could contribute to the goal tally.

Team news
Manchester City
Gabriel Jesus could keep his place in attack, leaving Sergio Aguero on the bench, while Fernandinho and Vincent Kompany could feature.
Swansea
Leon Britton returns to the squad but the Swans could name an unchanged starting 11.