Portugal may have to be patient against Morocco 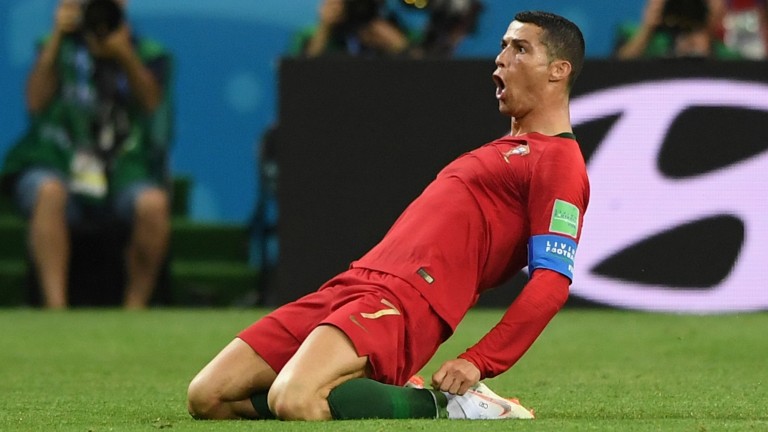 Cristiano Ronaldo scored a hat-trick for Portugal against Spain
Getty Images
1 of 1
By Ian Wilkerson UPDATED 8:03AM, JUN 20 2018

Had England failed to grab an injury-time winner against Tunisia on Monday, it would have been a draw that felt like a defeat, but emotions will have been completely the opposite in the Portuguese camp after their opening 3-3 with Spain.

Cristiano Ronaldo's heroics meant the European champions were buzzing as they left Sochi and the clash is still the best match we have witnessed in the tournament.

But deeper analysis may suggest it papered over the cracks and only after Wednesday's game against Morocco will we be able to gauge whether Portugal have a genuine chance in this World Cup.

There are parallels from 32 years ago when Argentina would never have won the tournament without Diego Maradona, but there are issues for Portugal to sort out if they are to emulate that achievement.

They scored three goals against Spain but those came from the only three shots they posted on target.

One was a penalty, one was thrown over the line by a player who was hailed before the incident as the best goalkeeper in the world and the other was Ronaldo scoring from a free kick after 44 unsuccessful attempts in international tournaments.

Portugal struggled to get near the ball against the masters of retaining possession and they undoubtedly looked shaky at the back, where the aging Jose Fonte and Pepe were outplayed by the excellent Diego Costa.

Maybe it was another case of Portugal doing just enough.

They famously won just one game within 90 minutes on their way to success in Paris two years ago and there is little doubt that their confidence will have gone through the roof after the nature of their opening draw.

It is perhaps fortunate that they are facing a defensive team who will have no choice but to come out of their shell at some stage.

Morocco did not concede a goal in six African qualifiers and looked to be heading for another clean sheet against Iran before being stung by Aziz Bouhaddouz's injury-time own goal.

Plainly that has put a whole different complexion on the way Herve Renard's team have to approach what were always going to be their two most difficult Group B matches.

And it will be a huge disappointment that Nordin Amrabat will be missing with concussion after he looked their brightest attacking option in their loss in Saint Petersburg.

But they may not go gung-ho from the outset and a cautious approach in the opening stages of the game would not be a huge surprise as they look to contain Ronaldo particularly and then push for their own rewards later in the game.

Morocco will be mindful that being caught on the counter-attack in the early stages will effectively end their involvement in the competition.

Of course the Ballon d'Or holder could produce a piece of magic early on, but the game against Spain could have been a lot tighter had he not netted a spot-kick in the fourth minute.

Portugal may have to be patient and while Friday's draw between the big guns in the group has ensured goal difference will be a huge factor in who tops the section, it my take a while for them to break down Morocco.

It should happen eventually, but a lightning start may not occur and it is worth chancing that we will see Portugal at their most ruthless in attack during the second half.

Team news
Portugal look set to be unchanged, but Andre Silva is in contention to be included at Goncalo Guedes's expense.

Strengths
Having arguably the best player in the world in your squad is priceless for Portugal, but they have the supporting cast in attack to bring out the best in Cristiano Ronaldo.

Weaknesses
Central defender Pepe and Jose Fonte are getting long in the tooth and struggled against Spain. They could easily be exposed again.

Key man
Ronaldo dragged his team to a draw against Spain and is revelling on the biggest stage. If he is on his game again in Moscow, Morocco are probably doomed.

Team news
Nordin Amrabat is ruled out with the concussion he sustained in the defeat to Iran. Hamza Mendyl could come in at left-back and Achraf Hakimi could move to the right.

Strengths
Herve Renard's team are strong at the back, but they will need to be against a sharp Portugese attack spearheaded by one of the game's all-time greats.

Weaknesses
They must show more composure up front after missing a host of chances against Iran in their opener.

Star man
There will be a lot of pressure on Juventus defender Mehdi Benatia, who has the ability to rise to the challenge.