Liverpool should advance in FA Cup 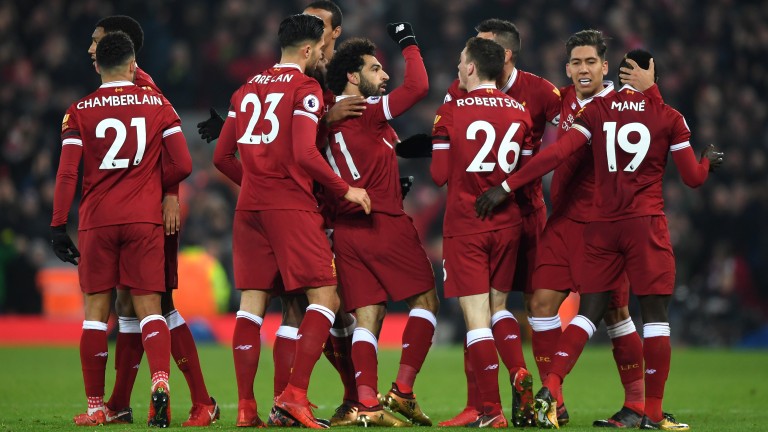 Liverpool celebrate during their 4-3 win over Manchester City
Shaun Botterill
1 of 1
By Mark Langdon 8:00PM, JAN 26 2018

Illness has swept through the West Brom camp this week and an FA Cup fourth-round trip to Anfield is unlikely to aid their recovery as Liverpool look to respond quickly from their Swansea shock.

The Reds were beaten 1-0 on Monday  and that may well deter many from going in again at short prices, although Liverpool still created enough chances to have escaped the Liberty Stadium with maximum points and the FA Cup seems to be a priority for the trophy-hunting Jurgen Klopp.

A strong side was selected in the last round - a 2-1 Merseyside derby triumph over Everton - and a game with goals could be the best way of supporting Liverpool once more.

Klopp's side have won 19 times in all competitions this term and 18 of those finished with at least three goals, so if Liverpool are to progress through to round five it would seem logical to expect a high-scoring tie.

Danny Ings is being tipped to start which means one member of the front three could be benched but as long as two of Mohamed Salah, Roberto Firmino and Sadio Mane are involved there should be enough firepower in the ranks to leave the Baggies dizzy.

Despite not scoring at Swansea Liverpool's expected goals was around the two mark, a respectable figure, although admittedly one that would have been pushed up as the Reds were made to press forwards and the hosts defended for their lives.

They are full of attacking intent and Albion may lack the defensive discipline to shut them out as successfully as Alan Pardew's men managed in a 0-0 draw at Anfield last month.

"The pressure is off us to maybe open up the game a little bit," said Pardew in reference to West Brom's main battle for the season, which is to avoid relegation from the Premier League.

A replay would be better than elimination but not by enough to employ similar tactics, particularly as Pardew has been keen to make West Brom a more positive team since replacing Tony Pulis.

Albion have scored in seven of their eight games since the Anfield stalemate and forced 37 shots on target.

Salomon Rondon and Jay Rodriguez are being used closer together which is helping to sustain attacks and from set-piece situations West Brom still possess the kind of height so loved by Pulis that could take advantage of any vulnerability in the home defence.

However, the last three visiting teams to Anfield all scored and still lost. The most recent of those, Manchester City, were 4-1 down before a couple of late goals brought some respectability to the defeat.

Team news
Liverpool
Keeper Simon Mignolet will start. Adam Lallana is out, while Ragnar Klavan and James Milner are unlikely to feature. Dejan Lovren returns and Jordan Henderson, Alberto Moreno and Daniel Sturridge are back in full training.

Key stat
Liverpool have lost one of their last 26 home matches.