Title rivals may struggle to get close to Mercedes ace 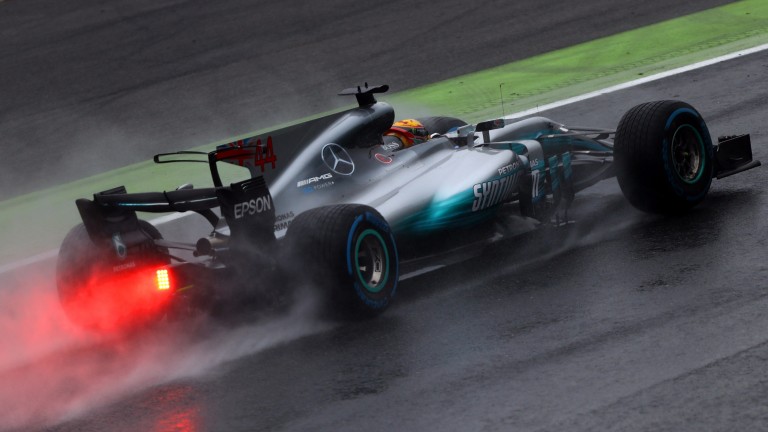 Lewis Hamilton left it late to storm to pole position in a qualifying session that was delayed some two-and-a-half hours due to the heavy rain that had been expected but failed to materialise on Friday.

It was the Mercedes driver's eighth pole of the season and a new Formula One record 69th of his career, and barring mechanical issues it is hard to see Hamilton failing to become the first driver this season to record back-to-back race victories.

The winner in Belgium last week, Hamilton is rated 2-7 to follow up and even at that price big-hitters may be tempted.

In the rain-sodden session, Red Bull drivers Max Verstappen and Daniel Ricciardo provided the strongest challenge but they will start 16th and 18th thanks to engine-change penalties.

The Milton Keynes team took the decision before practice in order to maximise their chances at the next race in Singapore - a twisty street circuit that should suit their car much better than Monza.

The result is that Williams' teenage rookie Lance Stroll joins Hamilton on the front row, with Esteban Ocon's Force India third on the grid.

Both drivers produced fantastic qualifying performances but in what is expected to be a dry race it is surely only a matter of time before Hamilton's teammate Valtteri Bottas and Ferrari pair Kimi Raikkonen and Sebastian Vettel get past.

If the interlopers get away from the grid cleanly, though, Hamilton could easily build a huge cushion in the early stages. Stroll and Ocon are powered by Mercedes engines, so they won't be sitting ducks on the straights.

Hamilton's last two victories in Britain and Canada came by margins of 14 seconds and 19 seconds respectively and the price on offer for the winning margin to be over ten seconds looks worth taking.

For the past few years Williams have struggled to get the best out of Pirelli's wet-weather tyres, but Stroll and Felipe Massa looked strong in qualifying.

That followed decent-enough form in Friday's dry sessions and the slippery Williams cars could be in line for a much-needed points boost.

Massa has finished in the points in seven of the nine races in which he has seen the chequered flag this year.

It has been a steep learning curve for Canadian Stroll, but since his breakthrough first points finish in Montreal he has put in several solid efforts.

He finished 11th in Belgium last week after a mature drive on a weekend when the car had not looked at all good throughout the preliminaries and he had started 15th on the grid.

It may not be long before Bottas, Raikkonen and Vettel find a way past, but Stroll can make a good fist of hanging on to a top-six position.