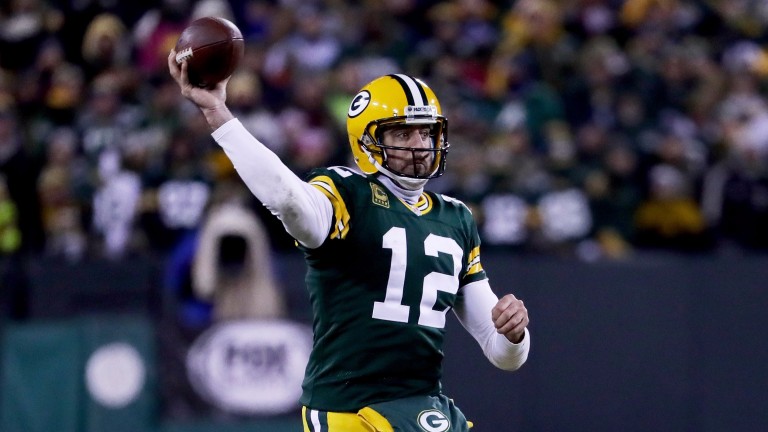 The nature of Green Bay’s triumph over the New York Giants last week enhanced the Packers’ claims to be one of the favourites for Super Bowl glory and Sunday night’s clash with Dallas looks set to be a cracker.

Green Bay and quarterback Aaron Rodgers in particular are in dynamic form.

They have won their last seven matches and in his last eight outings Rodgers has thrown 22 touchdown passes and no interceptions.

Some of his play against the Giants was simply extraordinary and made all the more impressive by the fact that he was without his best receiver Jordy Nelson for much of the game because of a rib injury.

That will keep Nelson out of the action at AT&T Stadium, but Rodgers has so many tricks up his sleeve and a remarkable talent for finding time and space in the pocket that his absence may not prove a fatal blow to their Super Bowl chances.

Green Bay have scored at least 30 points in each of their last five matches and there will be an expectation that Dallas will be able to keep the scoreboard ticking over.

Led by the rookie duo of quarterback Dak Prescott and running back Ezekiel Elliott, the Cowboys had few problems winning the NFC East and have won their last seven home matches since losing to the Giants on the opening weekend.

Don’t read too much into their Week 17 defeat to Philadelphia as the NFC’s number-one seeding was already in the bag and they were looking forward to the post-season.

The pressure is on ‘America’s Team’ to make a big post-season impression in front of a noisy crowd, so they should make a dynamic start.

Five of Green Bay’s last six away games having gone over the points line, and this could be another one.

It is also worth taking a punt on Prescott scoring a touchdown at 9-4.

The Cowboys quarterback has gone over six times to score in
his first season and with Elliott, who has been the league’s best rusher, bound to receive plenty of attention if Dallas get into close range, Prescott may be able to take advantage and score himself.

Team news
Green Bay
Wide receiver Jordy Nelson is out with a rib injury while running back James Starks has concussion. Fellow rusher Ty Montgomery should play after a knee injury.

Dallas
Cornerback Morris Claiborne has recovered from a groin injury and should play. Left tackle Tyron Smith is fit after a knee problem.