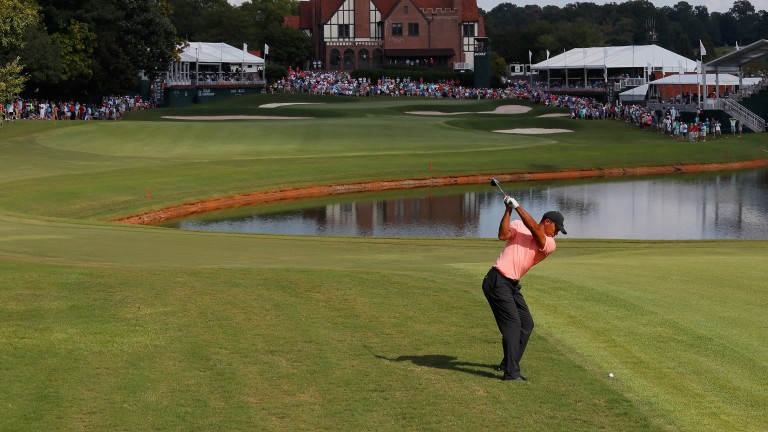 Rory McIlroy and Dustin Johnson are jostling for Players Championship favouritism, but both can be opposed for the US Tour's flagship event. McIlroy has lost in the final group of ten tournaments in the last three years, most recently at Bay Hill last week, picking up a losing habit, while Johnson has miserable Sawgrass form figures of MC-79-34-57-WD-59-69-28-12-17.

Neck problems meant Tiger Woods opened up at 28-1 with bookmakers and 33-1 on the exchanges for the Players, but positive health bulletins suggest the living legend has recovered from the minor injury and is double the odds he should be for the Sawgrass showpiece.

Nobody in the field is better suited to the Sawgrass assignment than the modern Woods, arguably the best iron-player in the world, even at the age of 43. He can leave his often troublesome driver in the bag and plot his way safely along this short, tight, water-strewn layout in his adopted home state, marrying his precision with the guts that made him the greatest champion of his generation.

Sawgrass is about control, strategy, patience and courage – qualities where Tiger has no equal – and he has won three times there. Much has been made about the switch of the Players from May to March, but it will not worry Woods, who has triumphed there in March, May and August. It was the scene of his first US Amateur victory in 1994, before two Players successes. While most of this week's field have never seen Sawgrass with overseeded rough, Woods has competed in ten March Players.

Last year, he did not arrive in great nick, having closed with a birdie-free 74 for 55th place in the Wells Fargo Championship the week prior. He had not played Sawgrass for three years and took a while to get going, but over the weekend he found top gear, rounds of 65 and 69 claiming 11th spot. His caddie, Joe LaCava, has said that from that moment onwards he knew “Tiger is going to own this course for a decade”.

This year, Woods has slowly but surely improved, 20th place at Torrey Pines followed by 15th at Riviera and tenth in Mexico. He employed what was, at the time, a bemusingly conservative approach in Mexico to a course which requires attacking intent, but the world has since learned he was labouring with his neck strain. It is testament to the majestic standard of his iron-play that he could still finish tenth in WGC company while handicapped.

A fortnight off has allowed Woods to heal and freshen. His last victory came at East Lake, a similar test of accuracy and course-management, and Sawgrass is the natural follow-up. Putting improvements seem certain as he switches from the west coast to east – he admits he has been yearning for Bermuda grass greens – and Cheltenham may not provide the only roars this week.

The chief danger to Woods may be Xander Schauffele, who made a superb Sawgrass debut last year, closing with a 67 for second place. The 25-year-old, hugely impressive in elite company and appearing to possess nerves of steel, has the tee-to-green solidity to thrive in the Players throughout his career.

Schauffele started 2019 with a spectacular final-round 62 to win the Sentry Tournament of Champions in Hawaii, following up with US Tour form figures of 25-10-15-14. The last two East Lake champions can duel for the Players title on Sunday.

Ryder Cup colossus Ian Poulter has the right temperament for this intimidating arena and has twice finished runner-up there, most recently in 2017. He has teed up in a March Players three times and the Florida-based bulldog should revel in the conditions. The Houston Open champ has started 2019 superbly, with form figures of 6-3-6-3-23 from his last five events.

Complete a four-pronged attack with former world number one amateur Patrick Cantlay, who has steady Players form (22-23), loves Pete Dye designs, and moved to Florida last year. He got to know Sawgrass in his high-school days, competing in the Junior Players. His Heritage form figures on another Dye creation are 3-7, while he carded a 60 as an amateur in the 2011 Travelers Championship at another course with Dye's fingerprints upon it. Cantlay has been excellent this term – recording results of 17-7-2-5-9-MC-15-6 – and has the ideal game for Sawgrass.

Others to note
Francesco Molinari
The Italian won at Bay Hill on Sunday thanks to a red-hot putter and a final-round 64. His Sawgrass form figures are 6-7-6-MC from his last four starts and he has to be feared.

Justin Thomas
The 2017 US PGA champion and former world number one has an affection for Sawgrass, where he finished third in 2016, and does not deserve to be any bigger in the market than McIlroy and Johnson.

Matthew Fitzpatrick
The Bay Hill runner-up has an excellent game for Sawgrass and his fresh alliance with superstar caddie Billy Foster should yield another healthy cheque.

Rickie Fowler
The 2015 Players champion has been inconsistent this year – brilliant one week, dire the next – and there is every chance he will do his running at this happy hunting ground.

Si Woo Kim
The 2017 champion finished fourth at Pebble Beach and third at Riviera, but a withdrawal from the WGC hinted at injury or exhaustion, and he missed the cut at Bay Hill on his return.

Cameron Smith
The local resident started the US Tour season strongly and finished sixth in Mexico, but a second-round 79 and a missed cut in the Honda Classic last time out was a shock to the system.

When to watch Live on Sky Sports from 11.40am Thursday

Course overview The famous Pete Dye design, which has hosted this tournament since 1982, can be a brutal test. The Championship became known as the 'fifth Major' due to the quality of the field – all the elite usually tee up. The event was originally staged in March with overseeded rough, but moved to May in 2007, switching back to March again for the first time this year. Dangerous holes, one of the most talked about in golf being the island-green 17th, can see competitors card some big numbers and the event always makes for a fascinating spectacle. There is a bearpit atmosphere created by large galleries, many of whom gather at the 17th hole. The par-fives – the second, ninth, 11th and 16th – offer relief during a demanding round. The track has a state-of-the-art drainage system, so officials can usually guarantee the firm, fast conditions they desire. Precision is required throughout, while a deft touch is demanded on and around small, contoured greens, which are usually lightning fast. The greens were changed prior to the 2017 event, the dancefloors becoming TifEagle grass rather than MiniVerde. Holes six, seven and 12 were redesigned. Mounds in between the sixth and seventh were removed, with a lake added, while the 12th became a 302-yard driveable par-four with water left

Story of last year Webb Simpson turned the event into a procession, ending a winning drought of more than four years with a four-shot triumph, able to double-bogey the final hole and still leave the rest in his wake

Weather forecast A mixture of sunshine and clouds, with a thunderstorm threat on Saturday, and light to moderate breezes throughout

Type of player suited to the challenge Short but straight hitters traditionally shine at this venue. Tim Clark, KJ Choi, Matt Kuchar, Si Woo Kim and Webb Simpson are recent Sawgrass champions who fit that category. The likes of Stephen Ames, Fred Funk and Hal Sutton have also won this title through their fairway-finding prowess. Focus on controlled golfers who can avoid the water hazards and have the bottle to perform in a raucous atmosphere. Debutants are greatly disadvantaged at a quirky, long-established track