Pieters and Fowler could be set for mouthwatering Sunday duel 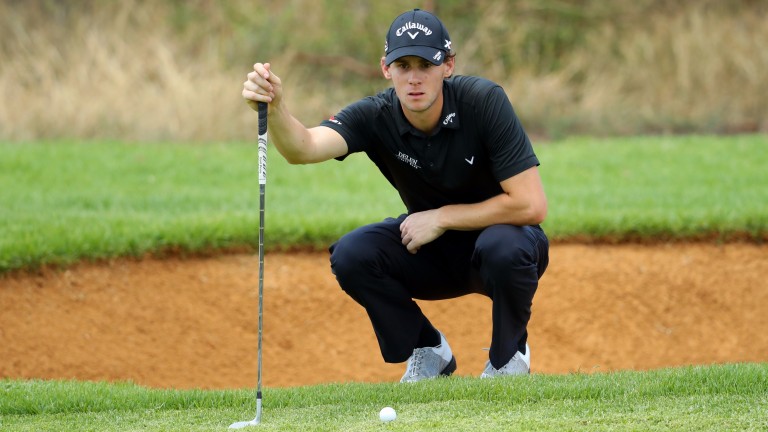 Thomas Pieters has performed superbly on his Augusta debut
Warren Little
1 of 1
By Steve Palmer 10:14AM, APR 8 2017

Four players are tied at the top of the leaderboard at the halfway stage of the Masters, breezy conditions meaning the best quartet have managed only to reach four under par.

First-round pacesetter Charley Hoffman was the first to post that score, soon followed by Sergio Garcia. Hoffman followed his magical opening round of 65 with a three-over-par 75, while regular Majors bridesmaid Garcia carded six birdies in a 69.

Thomas Pieters, a stand-out pre-tournament 100-1 with Betfred and a general 66-1 chance, delivered a bogey-free back-nine to join the party at four under. Debutants traditionally struggle at Augusta, but the Belgian bomber has taken to the Cathedral of Pines like a duck to water.

Rickie Fowler was the final man to hit the summit. Aside from finding the water on approach to the par-five 15th, Fowler exuded control throughout his second-round 67, and the popular American has taken over as market leader.

Fowler is 4-1 favourite with 36 holes to play, Garcia is 13-2, and Jordan Spieth, who fought back from three over par to level par in round two, is next in the betting at 7-1. Pieters is a 9-1 chance to become the first debutant since 1979 to win the Masters, while Rory McIlroy, five shots behind at one over par, can be backed at 11-1.

Phil Mickelson (level par) and Hideki Matsuyama (two over) will still think they can force their way into things over the weekend, but the race is run for those who missed the cut.

Defending champion Danny Willett, Open champion Henrik Stenson and dual Masters victor Bubba Watson all felt the halfway axe, while Jason Day needs a miracle having made the cut on the mark (six over).

The Masters leaderboard is absolutely fascinating going into the weekend, with no Major champions in the top five.

We have Sergio Garcia, who has blown a million chances of winning a Major. We have Rickie Fowler, who has been close with no cigar over the last few years. We have Thomas Pieters, who has just started on his Majors career and already looks good enough to win one. Then we have Charley Hoffman and William McGirt, a less talented duo who have probably never believed they could land a Major title.

Before assessing the likely fortunes of that quintet in the final 36 holes, it must be noted that the tournament conditions are set to change. The first two rounds have been played in windy, cool, tough weather, but the weekend is set fair. Augusta dries out quickly, and firmer, faster turf should be anticipated, along with less breeze.

Who is going to handle the revised assignment best? Hoffman has already clicked into reverse gear and may struggle to get out of it, while McGirt almost certainly lacks the class to stay up with the pace, too.

Garcia is more relaxed and more cheerful than ever – soon to be married and full of smiles – but the jolly exterior masks an inner desperation to become a Major champion. The Spaniard will not be content on his death-bed if he is looking back on a long and successful career without a Major title on his record. He turns 38 in January and time is running out. Will the pressure and an ever-dodgy putting stroke result in yet another near-miss?

The future is golden for Pieters, a fact underlined by his awesome top-scoring performance in the Ryder Cup last year. He made a Ryder Cup debut look like a walk in the park and is doing the same with his first visit to Augusta. What a player.

Pieters appears to have balls of steel and 9-1 quotes about him completing a fairytale victory look on the generous side. There is every reason to believe he will go from strength to strength from here. Obviously as a debutant, he was most vulnerable early on, and should improve with two rounds successfully negotiated. And the improved weather will encourage more attacking tee-to-green golf, allowing this powerhouse to fully unleash his arsenal.

Pieters at 9-1 and Fowler at 4-1 are the two most interesting prices at this stage. There is plenty of quality lower down the leaderboard and somebody is bound to make a charge from deep in the good weather, but Pieters and Fowler are both playing great golf and may have stolen a march on the chasing pack.

Fowler has been in golden form since the start of February and every department of his game is in order. Technically there is no obvious reason why he should not be bang in contention on the back-nine in round four – it is merely a question of whether he can hold his emotions together to deliver the Major breakthrough he craves.

In-running outright investors could choose to back both Pieters and Fowler. With the extra juice in the Pieters price, the younger man looks slightly better value.

Third-round twoball punters are pointed towards Russell Henley, who will appreciate the drying ground and the extra emphasis on putting touch. Henley, impressive winner of the Houston Open last week, can account for Brendan Steele in the 5.50pm match.

The action resumes at 3.30pm UK and Ireland time, with the final twoball of Hoffman and Garcia boarding the first tee at 8pm.