But All Whites face more misery 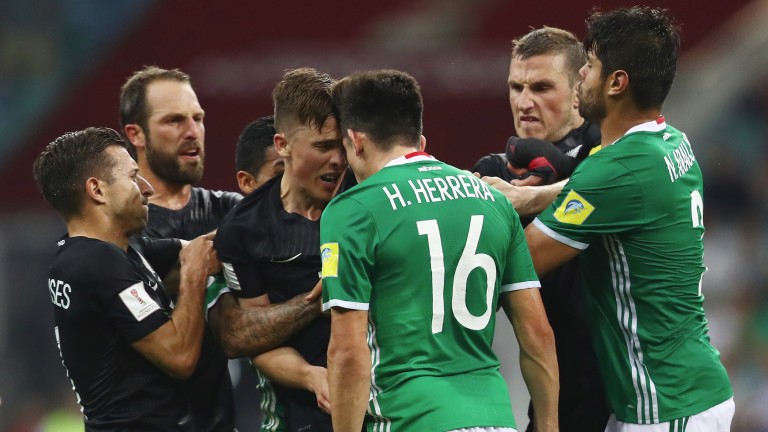 The other game in this group, the winner-takes-all dust-up between Russia and Mexico, has more riding on it yet ITV have decided to show New Zealand and Portugal live on ITV4, presumably due to the lure of Cristiano Ronaldo.

The TV bigwigs will be hoping that the Real Madrid icon starts while the All Whites will have a completely opposite view.

New Zealand's record against European opposition at the Confederations Cup makes miserable reading and offers little hope that they can spring a major shock against Portugal in St Petersburg.

Indeed, the Kiwis' record in this competition, wherever the opposition hail from, is dreadful with just a draw against Iraq and ten defeats to show for their efforts.

They have played European opponents at the Confederations Cup four times and lost all four without scoring a solitary goal and conceding 14.

Portugal head coach Fernando Santos is set to change his side around for this Group A showdown (even Ronaldo could sit it out) so confident is he that the European champions will be in the semis next week. Bookmakers share that view with Portugal long odds-on shots.

However, if, as expected, Santos introduces some new faces, while that in itself won’t make his team appreciably weaker, New Zealand may not get battered.

The Kiwis were excellent for a half against Mexico on Wednesday. They led 1-0 through Chris Wood and could have had a couple more. Mexico rallied in the second half and went on to sneak a 2-1 success.

It means New Zealand cannot qualify but pride is important. Anthony Hudson won’t want to fly home as the coach of a team who suffered three straight losses, even though it’s highly likely, so expect another competitive effort from a physical outfit.

Their defeats have been 2-0 and 2-1, so go for the hat-trick by backing Portugal and under 3.5 goals.

New Zealand have lost four games in a row since they flew to Europe at the start of the month, but have conceded just six goals in those matches.

Team news
Portugal
Left-back Raphael Guerreiro is out with a broken leg. The word is that Cristiano Ronaldo might not start as Fernando Santos is expected to make changes.

New Zealand
No new injury worries have been reported. Defenders Themi Tzimopoulos and Tom Doyle will be pushing for a first start.