Philly's Jay Ajayi can be the Super Bowl's MVP 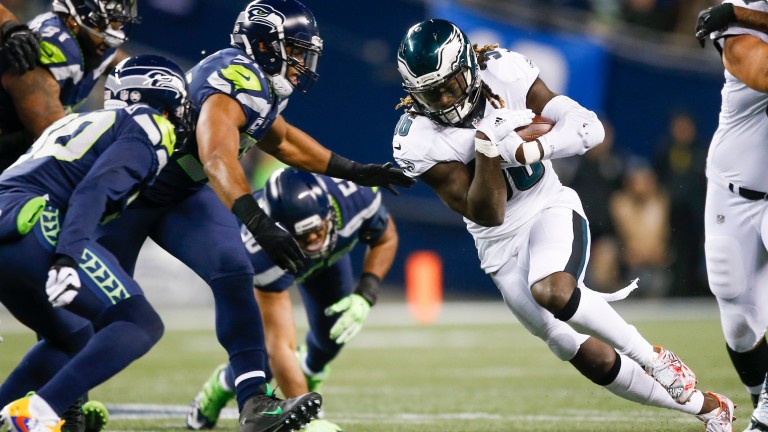 The winning quarterback has been voted the Super Bowl's Most Valuable Player in eight of the last 11 showpieces, so it is no surprise to see Tom Brady as hot favourite to take his fifth crown.

Odds of 8-11 looks on the short side, although with the money line showing New England as 8-15 favourites, that MVP price may attract punters who fancy the Patriots to claim another Vince Lombardi Trophy.

It seems there are few candidates to win the prize if the Patriots win the game as a receiver would probably have to score two or three touchdowns to claim the prize and Brady would be the man throwing the ball to them, so the wideouts would still need the quarterback to contribute.

It makes sense to look a bit further down the list and Philadelphia's London-born running back Jay Ajayi is of interest.

History suggests Ajayi could be up against it - Denver's Terrell Davis was the last rusher to win the MVP in 1998 - but the man surprisingly traded from Miami to Philadelphia in mid-season could become the focus of the Eagles' offence in the big game.

The Patriots have not been great against the run this season and Ajayi could see plenty of the ball if quarterback Nick Foles, who has played just five games this year, eases his way into the game.

Ajayi is capable of an explosive play and as Foles's limited action means he does not have a key offensive target, a couple of long runs could be enough to gain him the prize and he is worth chancing at a big price.

Alongside Ajayi will be Philly's other main running back LeGarrette Blount, who claimed a ring with New England 12 months ago.

He is more robust than his partner and will look to grind out the yardage that will help the Eagles keep Brady on the sidelines.

Blount is capable of keeping his legs moving under the fiercest pressure and he has had a run of more than eight yards in 12 of his 17 appearances this year, so it is worth chancing that a clash against his former team will inspire him to do so again.

For the Patriots, Brady is likely to try to release the ball quickly to avoid the attentions of a strong Eagles defensive line, but he is adept at doing that and New England are generally much stronger in the passing game.

They should still have opportunities and although Brady has thrown two or fewer touchdown passes in five of his seven Super Bowl appearances, they are coming up against the league's best rushing defence, so if they are to win the Patriots will probably have to take the aerial route.

To that end, it could be a big game for receiver Danny Amendola. He scored twice in the fourth quarter of their 24-20 win over Jacksonville in the AFC Championship game and could remain Brady's go-to man with tight end Rob Gronkowski having been knocked out of the Jaguars game with concussion.

Amendola, who was once on the Eagles' practice squad, has risen to prominence in the post-season and can cross the line as he did in last year's win over the Falcons.