Manchester City boss leads Italian by four wins to one 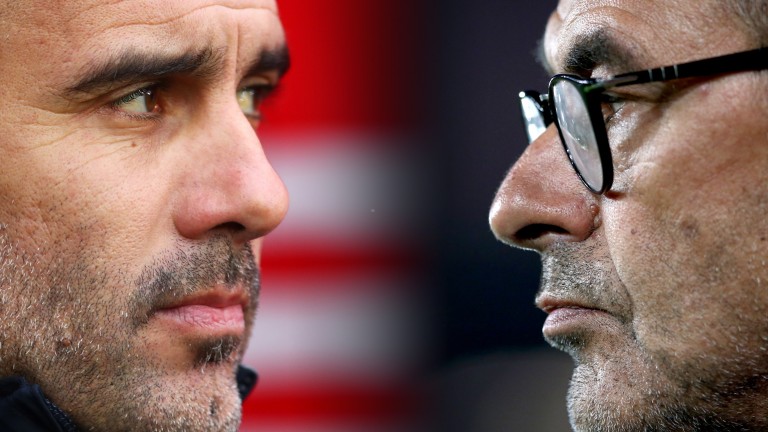 Pep Guardiola's respect for Maurizio Sarri was evident from the first time he squared up to the Italian, and he called Napoli one of the best teams he has ever faced following City's 2-1 win.

Early strikes from Raheem Sterling and Gabriel Jesus made it three wins from three games for City in the group stage as they went on to make the quarter-finals only to be dispatched by Premier League rivals Liverpool.

A tight tie was anticipated in the second meeting between Sarri and Guardiola, with over 3.5 goals a best-priced 5-4, but a second-half City onslaught saw them reach the Champions League knockout phase.

Sergio Aguero became City's all-time top goalscorer with his side's third goal and the Manchester club had announced themselves as serious contenders for the biggest trophy in club football.

The football world tuned into the 2018-19 season curtain-raiser eager to see how Sarri-ball would work at Chelsea and Aguero starred once again in a baptism of fire for the new Blues coach.

The Argentinian reached another milestone in a game against a Sarri side, striking his 200th goal after 13 minutes.

It was early in his Chelsea tenure but already Sarri was having to deal with reports that stars Thibaut Courtois, Eden Hazard and Willian were unsettled.

After the game he said: "I spoke with Willian, Courtois and Hazard only by phone. Tomorrow morning or afternoon I will speak to them again but, in this moment, I am confident."

Sarri's sole victory over Guardiola came in the wake of disappointing defeats to Tottenham and Wolves and stirred up the title race as it was City's first league defeat of the campaign.

Chelsea failed to dominate possession as they have done for much of the season, seeing just 38 per cent of the ball, but they took their chances with goals from N'Golo Kante and David Luiz wrapping up a surprising three points.

Sarri was already under pressure heading into this game following a 4-0 capitulation at Bournemouth in Chelsea's previous away fixture.

Guardiola's City were scintillating, racing into a 4-0 lead after just 25 minutes, and Sergio Aguero was at the forefront with a thrilling hat-trick.

The former Napoli boss was scrutinised for his tactics in this encounter as Chelsea failed to gain a stranglehold of possession, the one statistic they have continually dominated throughout the course of the season.

What they say about each other

Guardiola on Sarri
"I have no doubts that Sarri is one of the best managers out there. He achieved something incredible with Napoli. His style of football is as good as a drink in the sun." On Sarri's Napoli tenure.

"He didn't see me. I have a good relationship with him, no problem. They [Chelsea] beat us at Stamford Bridge. Against Napoli last season it was tight at times... people don't understand how difficult it is [to play this way]... it only depends on the belief of the owners." - On Sarri not shaking his hand after the 6-0 result and the Italian's future at Chelsea.

Sarri on Guardiola
"We went together to visit Arrigo Sacchi so Guardiola is a friend. I think he's the best coach in the world, or one of the best for sure. The match is very difficult for one reason: they have worked together for two years and we started two-and-a-half weeks ago, so for us it will be a very difficult match." Speaking before the 2018 Community Shield.

"He told me, in the first season, you have to work only on 14 players otherwise you are in trouble. You need too much time to improve all the squad. In England, it's really very difficult." Sarri on advice given to him by Guardiola.