We'd do well to pay greater respect to life's uncertainties 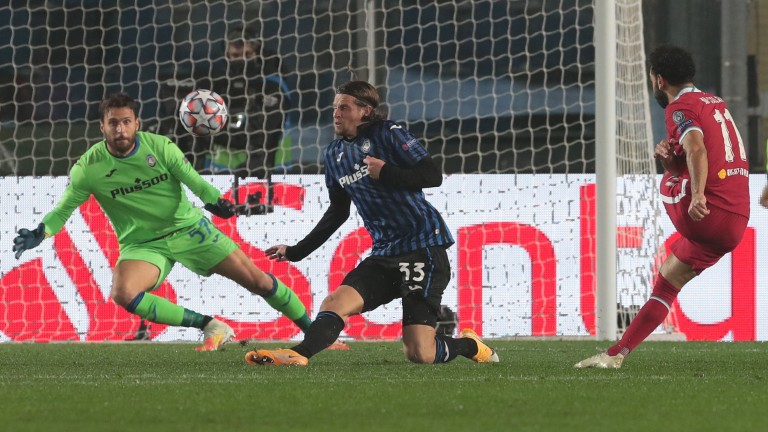 Liverpool produced a five-star performance to defeat Atalanta in the Champions League on Tuesday
Emilio Andreoli
1 of 1
By Bruce Millington UPDATED 5:52PM, NOV 11 2020

It has been interesting to see the reaction of an intelligent, betting-savvy person to joining Twitter recently.

The person is Mark Holder, who is more than just betting-savvy. He is a professional punter of some repute, and the fact he has resisted the lure of the social media platform for so long probably endorses his status as a shrewd individual.

Having missed out on Twitter’s various stages of evolution - original, exciting, important, slightly irritating, toxic and now increasingly optional - it is little wonder Holder finds it such an odd place.

He posted the other day: “I’ve been on Twitter a week, and I can’t get my head round how many people talk in certainties about EVERYTHING. “He’ll win”, “he’ll lose”, “he’s useless”, “he’s brilliant”, etc. There are so many opportunities for people who DON’T think like this.”

One of the reasons people like Holder and my brilliant colleague Kevin Pullein are successful at analysing probabilities is because they pay uncertainty so much respect. They know how hard it is to be right and must take enormous comfort from seeing how many of the rest of us spout strong opinions without having armed ourselves with the knowledge to back up our views.

Before the whistle blows to start the big sporting event of the weekend, Manchester City’s clash with Liverpool on Sunday, lots of people will have their say on how it will pan out.

That’s a good thing. When there is so much to be gloomy about in the world right now, it is nice that people can occupy their minds with an issue like which of these two superb teams will come out on top.

But few of those views will accurately reflect how difficult it is to predict the outcome of a contest between two such closely matched opponents. We will be told all sorts of conflicting likelihoods.

Liverpool will get opened up easily because they no longer have Virgil van Dijk. City have not looked the same team this season. Liverpool, now they have a strong fourth option in attack in Diogo Jota, will outscore City. Guardiola’s men will have too much quality in midfield.

There is, of course, no harm in having a strident view, and pub conversations would be particularly dull if everyone just shrugged and said they didn’t know what would happen and that the odds were probably about right.

However, because I am significantly less shrewd than Pullein and Holder, and too pitifully keen to be seen to be right, I think Liverpool are a decent bet at 5-2.

There is, of course, a perfectly plausible case to be made for City because they are a fine side who have won 50 of their last 60 home Premier League matches and appear to have better defensive options than last season.

Moreover, there has not been an away win in any of the last nine league meetings of these two titans of English football.

Liverpool suffered a huge blow when Van Dijk was seriously injured, and things were not helped when favoured replacement Fabinho tweaked a hamstring.

But they have responded to the loss of their defensive leader by winning all of their subsequent five games, conceding just two goals and looking extremely formidable when hammering Atalanta 5-0 in Italy on Tuesday.

That does not mean they are not missing the Dutchman, and it might be that on Sunday Jurgen Klopp’s side will show just how much of a hole Van Dijk has left at the back, especially as City’s potency is increased by the return to action of Gabriel Jesus and the possible availability of Sergio Aguero.

But Liverpool were 18 points superior to City last season and have five points more this term, albeit from a game more.

At 5-2, in a game with no supporters present, I am happy to believe Liverpool are a decent bet, even though I know, because I respect even if I don’t always heed the words of wise people like Holder and Pullein, that I am fundamentally wrong to be so confident about the outcome.

And I’m also confident, rightly or wrongly, about another aspect of Sunday’s big game, namely that anyone billing it as any sort of title-decider is completely wrong, because even though latest outright odds of 11-8 City and 2-1 Liverpool suggest it is pretty much between those two, that is an incorrect assumption.

I have little interest in Tottenham at 8-1 but believe Chelsea are too big at 12-1. Frank Lampard his fixed his main problem, with the excellent Edouard Mendy having replaced the hapless Kepa Arrizabalaga in goal, and has made several other key upgrades, particularly at left-back and in all attacking areas.

Sunday’s match at the Etihad is hugely intriguing but is likely to be far less influential on the outcome of the Premier League than many will claim.

Of all things that get unfairly criticised in football, including players wearing gloves when it doesn’t seem that cold, managers not knowing their best 11, and strikers failing to hit the target, little is quite as unjust as the castigation of players for retiring from international football.

Obviously, when people who once gained a solitary cap announce they are calling it a day on the international front they are entitled to a quick blast of ridicule, but when players who are still regularly called up decide they would rather not be any longer the stick they receive is uncalled for and fails to acknowledge the reason why.

That is, of course, to prolong a club career and if you want a good example of someone who made that choice and is reaping the rewards look no further than Jamie Vardy.

The Leicester hitman announced in August 2018 that he was no longer available for England, having won 26 caps and being recognised at the time as the second best striker available to Gareth Southgate.

The trouble for Vardy was the first choice, Harry Kane, was going to get picked every time as long as he was fit, so, at 31, he felt it was sensible to focus on Leicester.

It has been an excellent decision.

Kane has remained first choice, albeit he has missed some games through injury, and Vardy has been able to continue scoring in the Premier League, something that brought him the Golden Boot last season.

Vardy is one of the most admirable footballers of recent times. His late rise to the top table and his prolific scoring in Leicester’s title-winning fairytale have been incredible to witness and he remains as sharp and lethal as ever.

At the age of 33 his wizened features bear an increasing resemblance to Albert Steptoe, but on the pitch his burst of speed and willingness to run himself ragged for 90 minutes give him the look of a teenager, and he shows no signs whatsoever of declining in his performance levels.

Had he been required to spend half-a-dozen stints with England every year, working hard in training and sitting on the bench in case Kane got injured, he could have lost his edge by now or picked up  injuries that could have blunted his sharpness or even curtailed his career, so the decision to give England a miss has been firmly vindicated.

And do not rule out Vardy and Leicester giving it a serious push for a top-four place this season. They look very dangerous despite having been whacked hard by injuries.

When they get their absentees back I expect them to be an opponent every side should fear and they are another reason why I would be extremely surprised if this season it is a case of Liverpool and City battling it out for the title with the rest nowhere.