Peloton legends Froome and Nibali are fancied to shine

Cobbles history as the Tour moves into its Alpine phase 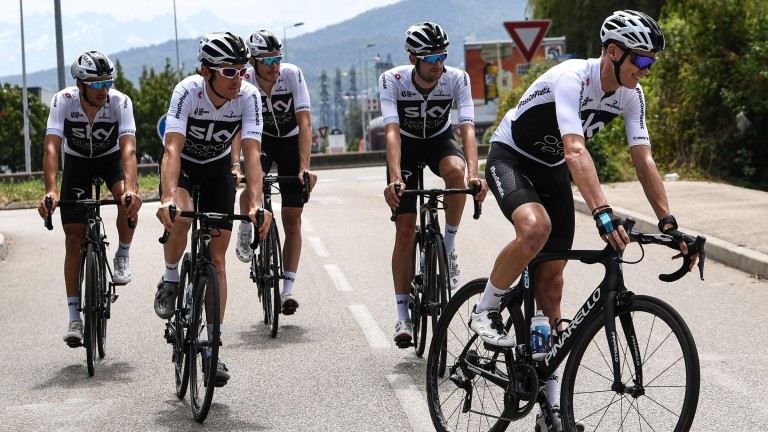 Chris Froome (right) and his Sky teammates went out for a spin on rest day
JEAN-PIERRE CLATOT
1 of 1
By Bruce Millington UPDATED 6:57AM, JUL 17 2018

After Sunday's carnage on the cobbles, Monday's rest day will have represented an act of mercy for many of the battered Tour survivors, especially as three days in the Alps commence this lunchtime.

The mini version of Paris-Roubaix lived up to its billing with attacks, crashes and heroic recoveries galore and created perhaps the most brutally spectacular Tour stage that did not involve a mountain of all time.

The bone-jarring cobbles of northern France are replaced by the high mountains further south-east this week, and the first of the three tests takes the riders over four high peaks before they thunder downhill into the finish.

Expect Thomas De Gendt to be at the forefront of various getaway bids in the early kilo­metres, but the first mountainous stage tends to be a genuine GC battleground as the big guns attempt to assert themselves and the relatively compressed state of the leaderboard means few riders can be allowed to skip clear.

Sky traditionally demonstrate a show of strength in these stages and may well seek to blast their rivals on the back of the rest day and shred a number of their rivals' podium aspirations.

Their battle with Movistar's trio of potential winners will be a fascinating element of this week's Alpine skirmishes and if both teams are feeling fresh and feisty some epic racing awaits.

If you back one of the contend­ers for overall glory you have to accept the risk of a group of escapees going clear and holding on, but it could be worth backing two of the giants of the peloton to be heavily involved in the finish.

Chris Froome would not have been considered for a stage like this a few years ago as he was considered a weak descender, but he has learned to hurtle downhill almost as effectively as he ascends, as his decisive stage win in the Giro showed. The Tour favourite has a better chance of a top-three finish and even a victory than his odds suggest.

His placings in the first high mountains stage of the Tour in the five years from 2013 are 1-113 (the dash being when he had already crashed out), which is encouraging even though most of those finished at the top of climbs rather that the bottom.

Vincenzo Nibali, by contrast, has always been a daredevil when it comes to getting from high altitude to low, and, while he might lack the legs to challenge for top spot on the Paris podium, he should be a big player on this stage, as this fascinating race enters one of its key phases.