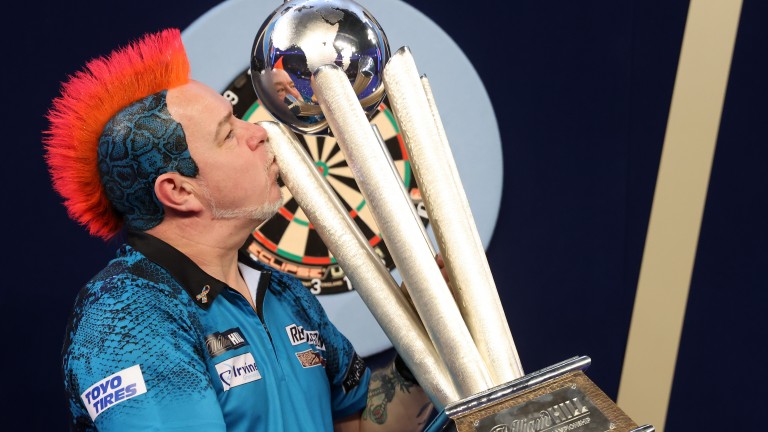 Peter Wright was on top of the world on Monday night when he held aloft the Sid Waddell Trophy for the second time after his thrilling final triumph over Michael Smith – but it still hasn't earned him favouritism for the 2023 William Hill World Darts Championship.

Snakebite went off the 7-1 third-favourite for this year's worlds which he clinched with a scintillating 7-5 success over Smith, coming from 5-4 down and withstanding a record-breaking 180s barrage from Bully Boy to secure his second crown.

But despite producing a two-week masterclass at Alexandra Palace, the Scot is a best-priced 13-2 to defend his hard-earned spoils.

Gerwyn Price, a beaten quarter-finalist and still world number one, and Michael van Gerwen, whose own assault on a third world title was cut short by a failed Covid test, are the 5-1 joint-favourites.

Next best is Jonny Clayton at 8-1 with the bookmakers confident that the four superstars who headed the betting this time are still the four to catch.

Smith, who landed each-way odds for his backers at 25-1 this time, has been slashed to 12-1 after his latest near-miss. The runner-up king has now lost six major finals without ever getting his hands on a big prize but he's adamant he will come back stronger.

"I'm getting pretty used to these setbacks – but setbacks inspire comebacks," said the world number five. "I could have fretted years ago when I lost the Premier League final [2018] that it was not meant to be but I keep fighting and keep making these finals.

"I'm always there, battling, I'll get back home, back on the dart board. I'm capable of winning anything and the next time I'm here I'll win it."

If it's the established stars making the market then there are one or two newer names who have emerged over the last 12 months who punters could be attracted towards.

Few players impressed more at the Palace than Callan Rydz, who averaged over 97 in reaching the quarter-finals, produced a trio of whitewashes and gave Snakebite arguably his toughest battle.

The 23-year-old is a 40-1 shot for the 2023 worlds, Luke Humphries – who also reached the last eight – is 50-1 but if there's a glut of talented youngsters on the brink of major breakthroughs, then the oddsmakers are giving them the thumbs-down for now.

Nine-dart hero Willie Borland, for example, has been chalked up at 300-1, Welsh teenage sensation Lewy Williams is 400-1 while 21-year-old Bradley Brooks is backable at 500-1.

Old favourites on the wane include Raymond van Barneveld, Mensur Suljovic and Simon Whitlock, who are all in at 200-1, the same price as Fallon Sherrock.

Next up on the PDC calendar is the Ladbrokes Masters at the end of January, followed by the start of the Premier League in Cardiff on February 3, although darts' chiefs have delayed announcing the names of the ten players who will make up the field.