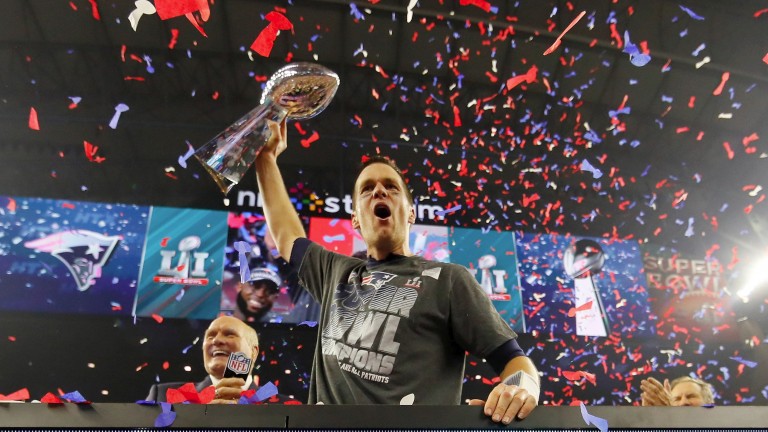 New England staged one of the most stunning comebacks in sporting history to land a fifth Super Bowl title for head coach Bill Belichick and quarterback Tom Brady.

The Patriots, three-point handicap favourites for the NFL title game against Atlanta, looked like being on the wrong end of an upset when they trailed 21-3 at half-time.

And when the Falcons scored first in the third quarter to make it 28-3 it looked a case of damage-limitation when Brady returned to the field.

New England were on offer at 22-1 in-play at that time and the comeback looked too much even for Tom Terrific - the previous Super Bowl record rally was only ten points and the Patriots trailed by 25.

But they staged an historic recovery, levelling the score thanks to two two-point conversions to force the Super Bowl’s first overtime period and made history with a 34-28 success thanks to James White’s winning touchdown.

Patriots handicap backers might have been forgiven for tearing up their slips but they even covered those bets with their 31 unanswered points as overtime counts in NFL handicap betting. The same could be said for those who backed over 58.5 points in the game, as the overtime touchdown saw them over the line.

Atlanta's agony was shared by bookies who were would have cleaned up if the Falcons had beaten the well backed Pats.

"Our traders are more deflated than a New England football after that comeback", bemoaned Bet365's Steve Freeth, who said his firm lost more than £700,000 on the game.

It had been a 10-1 shot with Coral that overtime would be necessary to separate the teams.

Brady was named Super Bowl MVP for the fourth time even though he looked to have reached one of the lowest points of his career when his second-quarter pass was intercepted and returned for a touchdown by Robert Alford.

The Patriots are clear 7-1 favourites, and as short as 5-1, for another triumph in Minneapolis next year.

The Falcons are 14-1 shots, but are facing upheaval as offensive coordinator Kyle Shanahan, who masterminded their varied and potent attack, is set to leave to become the next head coach of San Francisco.