Patriots still top despite defeat to the Chiefs 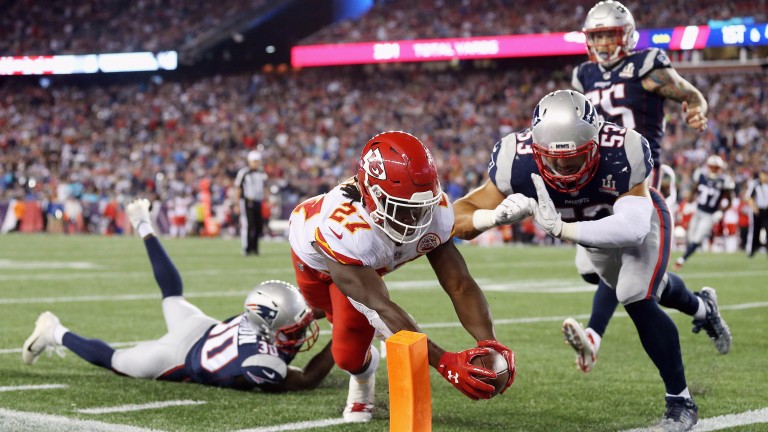 The Pats fell to three fourth-quarter touchdowns against the Chiefs, but they went close enough on a couple of occasions to suggest it was not a disaster. At least all the 19-0 talk is out of the way, so expect the strongest team in the league to pick themselves up.

A three-point victory over the Browns, who won just once all season last year, may not look convincing but the Steelers ground out the success. They should be on for a strong run with five of their next six games against teams who failed to make the playoffs last season.

The Chiefs had a dream start with landmark contributions from rookie running back Kareem Hunt and blistering wide receiver Tyreek Hill. A win at Foxborough will have done nothing but increase confidence and expectancy levels.

The Giants didn't put up much of a test with star receiver Odell Beckham out injured, but it was still a victory that gave the Cowboys a boost. The fact it was against an arch divisional rival helped too. A couple of tough trips await but they are on the right road.

The victory over the Seahawks was a ground-out affair and the Packers were fortunate to see Nazair Jones' pick-six ruled out. Nevertheless they dominated a weak Seattle offensive line and claimed a notable scalp. Makeshift running back Ty Montgomery also scored a touchdown. It was an ideal start.

It was a bit too close for comfort for the Falcons at Soldier Field as the Bears were right in the game until the last play. But any win will have been welcome after their Super Bowl capitulation and there is scope for improvement.

The Vikings showed their defensive mettle against the Saints and Sam Bradford was excellent, throwing three touchdown passes. It was the sort of all-round team performance that will make plenty of people sit up and listen.

The defence was resolute in the first half and they had their fair share of bad luck at Lambeau Field, but the offensive line has to improve if the Seahawks are to scale the heights of the last few seasons. Russell Wilson needs more protection.

The Raiders have Derek Carr back at quarterback and the defence ensured Marcus Mariota had a difficult afternoon. The Titans represent a decent scalp for the Raiders, who need to make sure they don't slip up against the Jets. They would be higher if they didn't play in such a tough division.

Cam Newton came through the game against San Francisco after a shoulder injury and should get better as the season progresses. The Panthers will have sterner tests and need to step up, even against the Bills this week.

Marcus Mariota struggled against Oakland, but the Titans still have a talented squad on both sides of the ball. And they look to be playing in the league's weakest division, so expect them to bounce back from a defeat to a good team.

Blocking a game-teeing field goal in the last second was enough to earn the Broncos victory. Sloppy turnovers helped the Chargers back into the game when they were 17 points down in the fourth quarter and Denver have to ensure they are more ruthless.

The Eagles were aided by a host of mistakes from the Redskins, but quarterback Carson Wentz should be encouraged by most elements of his performance. It was a valuable divisional win on which the new-look offence is capable of building.

The Buccaneers were without a game last week due to Hurricane Irma, but they have a talented roster with a realistic aim of making the playoffs this year and should make up for lost time.

The Lions finished strongly, which was their trademark last season and the Cardinals represent a decent scalp, even if Carson Palmer was poor and the Arizona rushing attack was dismal. It was a solid start but improvements can still be made.

A shutout victory was welcome but maybe said more about the Bengals dismal offence rather than anything else. However, the Ravens showed they are probably the Steelers' chief divisional rivals.

The news rusher David Johnson needs wrist surgery is a big blow and Carson Palmer needs to find some solid form if the Cards are to realise their playoff ambitions. Otherwise it could be a campaign of frustration.

An abject offensive display was not what was ordered at Arlington. The Giants missed star receiver Odell Beckham desperately and 35 yards was a pitiful rushing effort. They won't make the playoffs if that continues.

The Dolphins face a 16-week run of games after Hurricane Irma, but quarterback Jay Cutler should settle in well. The defence needs to step up though if they are to give New England a run for their money in the AFC East.

The Saints couldn't get their running game going in Minnesota and when they have invested so much in Adrian Peterson, that has to be a concern. Drew Brees can't get them out of trouble all the time and the defence still needs to shape up.

The surprise leaders in the AFC East got off to a winning start with a solid defensive and rushing performance. However, they have bigger tests to come so it won't pay to get carried away just yet.

To be shutout at home to a divisional rival on the opening weekend was a nightmare for the Bengals. There were calls to get Carson Palmer back, it was that bad. They need to show they can be playoff contenders and quickly.

The defeat to the Eagles was error-ridden and there will be question marks about how comfortable Kirk Cousins is while his contract arguments rumble on. The need a win in LA with tough games against Oakland and Kansas City to come in weeks three and four.

The last-gasp defeat at Mile High will hurt after the defence gave them a chance of making overtime and they will be hoping wide receiver Mike Williams is fit soon. It's a tough division but they can hold their own.

Sunday's defeat was dismal with Tom Savage quickly dispensed with and DeShaun Watson experiencing that life as an NFL quarterback is a lot tougher than in college. They may have a great defence but won't be going anywhere if the quarterback situation isn't sorted out. It's a familiar tale.

Conceding 46 points in any game is poor, but there cannot be many excuses against a team as ordinary as the Rams. Without Andrew Luck, they have no threat on offence and the defence simply capitulated. Chuck Pagano is favourite in the head coach sack race and results like this won't help his position.

Produced one of the surprising results of the day with Leonard Fournette having a decent debut at running back. The defence had a field day against a poor Texans attack, but it will take better performances against better teams for them to fly up the rankings.

The Browns are in transition but their young side put up a decent show against a good Pittsburgh team. They can't be too high having won just once last season but the signs are encouraging and they should soon be on the up.

Where did that performance come from? Quarterback Jared Goff showed significant improvement while the defence has always been decent. Let's just see if they can do it against decent opposition and we probably won't find that out this week.

The Bears should be encouraged by their finish against the Falcons even though they could not quite get over the line. They have a lot of ground to make up on the other teams in the NFC North but maybe the campaign won't be a complete disaster.

Offence guru Kyle Shanahan has plenty on his hands in north California and it looks like being another tough campaign. Playing in front of a noisy CenturyLink Field crowd when the Seahawks have just lost a big game is probably the last thing they need.

The Jets had little answer to the Bills' rushing game and could not get anything going offensively. Their lack of star talent makes them a sitting duck for many of their matches this season.