Patient City have the class to strike late 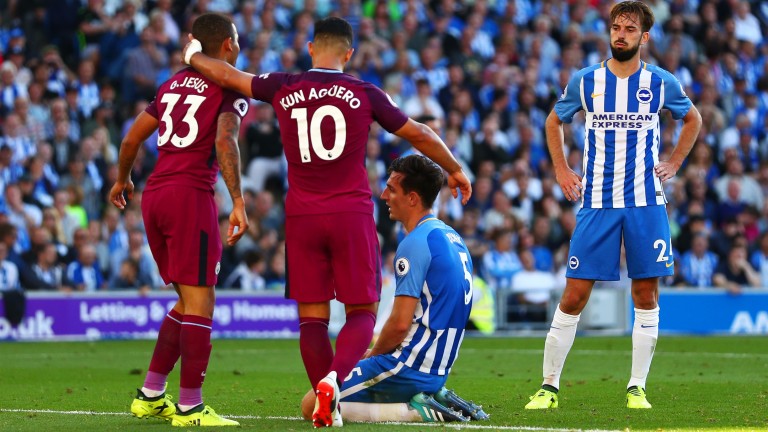 Gabriel Jesus and Sergio Aguero celebrate after an own goal from Brighton's Lewis Dunk
Dan Istitene
1 of 1
By James Milton UPDATED 8:07PM, AUG 21 2017

Manchester City's poor record against the Premier League's top clubs undermined their title challenge last season and Pep Guardiola will expect more ruthlessness from his side this term, beginning with the home game against Everton.

Last season's home fixture against Everton was emblematic of the Citizens' struggles as Kevin de Bruyne and Sergio Aguero both had penalties saved in a 1-1 draw.

The Toffees then thumped Guardiola's men 4-0 at Goodison Park in January but, despite a busy summer of recruitment, Everton are 11-1 outsiders for victory at the Etihad.

Romelu Lukaku, who scored in both games against City last season, is now rattling in the goals for Manchester United and Ronald Koeman's striking options - Wayne Rooney, Sandro Ramirez and Dominic Calvert-Lewin - may not worry a home defence bolstered by the fitness of skipper Vincent Kompany.

Everton are yet to concede in three Europa League ties this term and they beat Stoke 1-0 in their Premier League opener.

Returning hero Rooney scored the winner against Stoke but Gylfi Sigurdsson hasn't seen much pre-season action as his move from Swansea was being thrashed out and Ross Barkley, Yannick Bolasie and the influential Seamus Coleman remain sidelined.

Everton took two points from a possible 18 away at the top six last season and they tend to travel in hope rather than expectation for these kind of fixtures.

In the last three seasons they have won just four of 29 away games against top-half teams - at Crystal Palace, Southampton, Stoke and West Brom.

Manchester City started their campaign with a 2-0 win at Brighton and a performance that could become a blueprint for success against teams intent on damage limitation.

The title favourites controlled the game impressively and remained patient despite having to wait until the 70th minute for a breakthrough against the promoted Seagulls.

Wing-backs Kyle Walker and Danilo offer another angle of attack while tiring defenders will be quaking in their boots at the prospect of Leroy Sane, Raheem Sterling and Bernardo Silva coming off the bench.

Everton's early-season efforts have been solid but unspectacular and a cautious approach can be expected from the visitors.

But City's slick, probing passing game should wear down plenty of opposing teams this season and late goals may well be a feature of their campaign.

More goals to be scored in the second half looks a solid bet at evens - 39 of Everton's 62 league goals came after the break last season - but the home side's attacking class and bench strength suggests they could do some damage late on.

Team news
Manchester City
Benjamin Mendy and Fabian Delph are not fit enough to feature while Ilkay Gundogan is aiming to return after the international break following a serious knee injury.

Key stat
Everton took just two points from six away games against teams who finished above them last season.