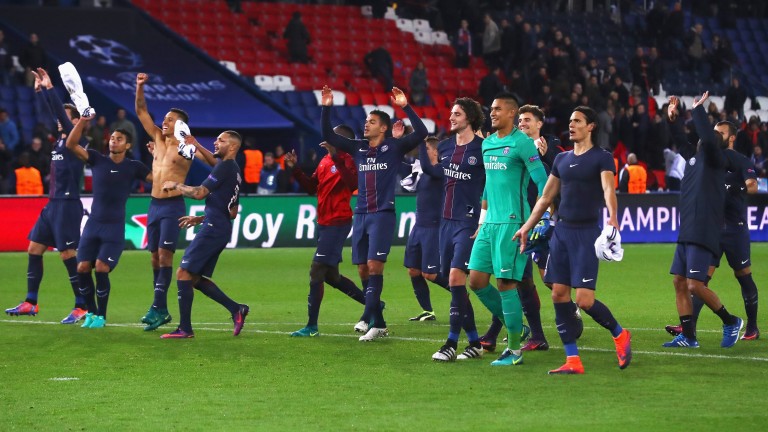 Arsene Wenger's quest for the rare honour of going through as group winners could receive a jolt as Paris Saint-Germain look set to leapfrog Arsenal with a win.

Arsenal and PSG are level on points at the top of Group A with the Gunners in first place courtesy of the away goal they scored in the 1-1 draw in Paris.

Wenger would dearly love to go through in top spot – they have flopped in the last 16 in each of the past four campaigns after qualifying as runners-up – though PSG coach Unai Emery is similarly inclined.

Since both teams are already through it means PSG have a clear shot at glory while knowing that a higher-scoring draw than they managed on Matchday One would also see them jump above the Londoners.

Team news
Arsenal
Hector Bellerin, Santi Cazorla, Per Mertesacker, Danny Welbeck and Lucas Perez are all injured. David Ospina will be in goal.

Paris St-Germain
Angel Di Maria has recovered from a thigh problem. Javier Pastore and Layvin Kurzawa are injured while Serge Aurier was refused a permit to travel.

Given that they are built on the best defence in France and were far superior to Arsenal in the first game, they are worth a punt.

Emery, a man who knows how to win European ties having masterminded Sevilla’s hat-trick of Europa League wins, has seen his side improve after a slow start to the campaign.

They trail Monaco in Ligue 1 but are on a run of eight wins and a draw in their last nine in all competitions with clean sheets in six of those.

The midfield trio of Blaise Matuidi, Thiago Motta and Marco Verratti is as good as any in Europe. Angel Di Maria is fit after an injury scare against Nantes and the hugely consistent Edinson Cavani has bagged 19 for club and country this season.

They can get at Arsenal down the flanks, just as Manchester United did on Saturday, and the absence of Serge Aurier because he was refused a visa doesn’t weaken the team, merely galvanises them.

As Parc des Princes old boy Zlatan Ibrahimovic pointed out just days after United played the Gunners off the park, the current PSG team is better than the current United one, and Emery’s side should be confident of landing the odds.

Wenger has decisions to make. Does he play both Alexis Sanchez and super-sub Olivier Giroud? Are Aaron Ramsey and Theo Walcott fully fit after missing training? Does the combustible Granit Xhaka start?

The fact that Arsenal are unbeaten in 17 and have already qualified means they are in a position of some strength.

But they aren’t consistent as recent matches against the likes of Swansea, Ludogorets and Manchester United showed. They can nod off and still make defensive mistakes.

Wenger predicts an open game between two attacking sides and that’s reflected in the 8-11 that both teams score. It’s certainly hard to see Arsenal playing for the 0-0 draw that would keep them top.