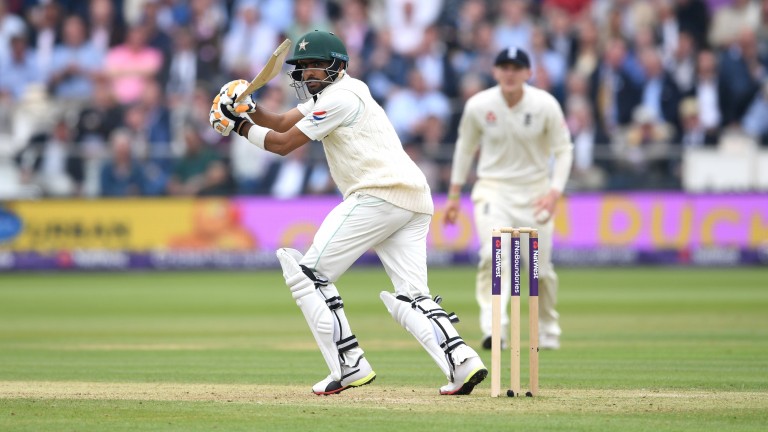 Pakistan are 4-7 with bet365 to win the first Test against England after finishing the second day with a lead of 166 runs at Lord's.

The tourists started the day on 50-1 after limiting England to a paltry first-innings total of 184 and Azhar Ali (50), Asad Shafiq (59) and Shadab Khan (52) all surpassed the half-century mark to take Pakistan to 350-8 at the close of play on day two.

Babar Azam top-scored with an unbeaten 68, before retiring with a wrist injury after being hit by Ben Stokes.

Alastair Cook is 7-2 with Hills to be top England batsman in the hosts' second innings after scoring 70 on day one, while Sky Bet price the former skipper at 8-1 to register a century.

Play concluded with Mohammad Amir and Mohammad Abbas at the crease and Abbas, yet to get off the mark, is 4-6 to be the next Pakistan man out.

Stokes and James Anderson finished the day with figures of 3-73 and 3-82 respectively, capitalising on more heavy cloud cover, but questionable fielding let Root's men down.

England are a general 9-4 to defeat Pakistan and in doing so avoid a sixth defeat in their last eight Tests.

In the IPL, Sunrisers Hyderabad claimed a 13-run victory over Kolkata Knight Riders in their playoff to set up a final with Chennai Super Kings.

The Sunrisers are 11-10 with Coral to win on Sunday and secure a second IPL title in three years.