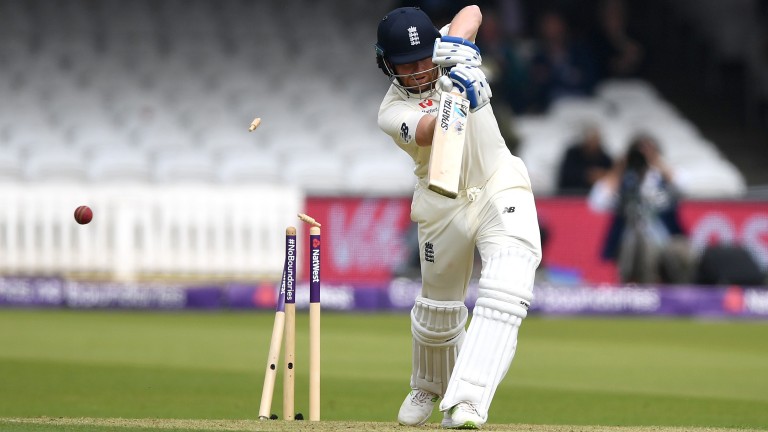 Jonny Bairstow is bowled by Faheem Ashraf during England's first-innings collapse at Lord's
Gareth Copley
1 of 1
By James Milton 8:00PM, MAY 31 2018

England's batting failed yet again in their nine-wicket defeat to Pakistan at Lord's and Joe Root's troubled troops must try to pick themselves up at Headingley, where they were beaten by 25-1 shots the West Indies last summer.

Pakistan's victory at Lord's wasn't quite such a seismic shock in betting terms but it was a painful cricketing humiliation for England.

Having been 1-2 favourites, even before Root won the toss, the hosts were saved from an innings defeat only by a seventh-wicket stand of 126 between Jos Buttler and Dom Bess.

Their top-order batsmen displayed an all-too-familiar lack of application, with airy drives being punished by some fine bowling from Pakistan's seamers.

The tourists are 100-30 to inflict England's fourth defeat in five Leeds Tests and complete a miserable start to the international summer for the home side.

Best bets
A chronic shortage of first-innings runs has left England's Test team chasing the game on a regular basis in recent years and their batting was ruthlessly exposed at Lord's.

Alastair Cook's 70 was the only decent contribution in a total of 184 that was swiftly eclipsed by Pakistan's first-innings 363.

At the prices, backing the tourists to claim a first-innings lead in Headingley makes some appeal, even with Babar Azam sidelined by the broken wrist that forced him to retire hurt on 68 in the first Test.

Pakistan's bowlers looked right at home in English conditions, taking 20 wickets to the home attack's ten at Lord's, and their batsmen also fared well despite limited experience in England.

Haris Sohail and Azhar Ali steered them to a solid position by the end of day one. Sohail worked hard for his 39 in the first innings before lashing a carefree 39 not out in the run-chase and he is a big price to reach 50 at Headingley.

The number three, who showed a solid defence and a fine array of attacking shots at Lord's, has first-innings scores of 76, 54, 31 and 39 in his first four Tests and made 79 and 55 not out in the warm-up game against Northamptonshire.

Jonny Bairstow had his stumps rearranged in both innings at Lord's, being bowled for a duck by a Mohammad Amir beauty second time around, but he had played nicely for his first-innings 27.

Bairstow is undoubtedly one of England's best batsmen, as proved by his promotion to number five, and odds of 6-1 that he top-scores in the first innings demand a bet.

The Yorkshireman scored two of England's four Test centuries during their dismal winter in Australia and New Zealand and will be desperate to lead the fightback in his fourth Test at his home ground, where he made 64 against New Zealand in 2013 and 140 against Sri Lanka in 2016.

Venue
Only one of the last 18 Tests at Headingley ended in a draw and England have lost three of their last four in Leeds, to Sri Lanka, New Zealand and the West Indies, who chased down a fourth-innings target of 322 last August.

Overcast conditions should encourage the quick bowlers and an 18-year-old Amir took seven wickets in Pakistan's victory over Australia in 2010, when they bowled out the Aussies for 88 on the first day.

Team news
Ben Stokes is a major doubt with a tight hamstring and opener Mark Stoneman has been dropped for Keaton Jennings – a reversal of last summer’s selection decision. Surrey's Sam Curran has been called up as cover for Stokes and Chris Woakes is pushing for a recall.

Babar Azam is out of the tour with a broken wrist so Usman Salahuddin is set for a Test debut in the middle-order.

Weather
Days one, three, four and five are likely to be overcast but dry, while light showers are forecast to disrupt play on the second afternoon. Highs of 22C.