Fraser can find the net 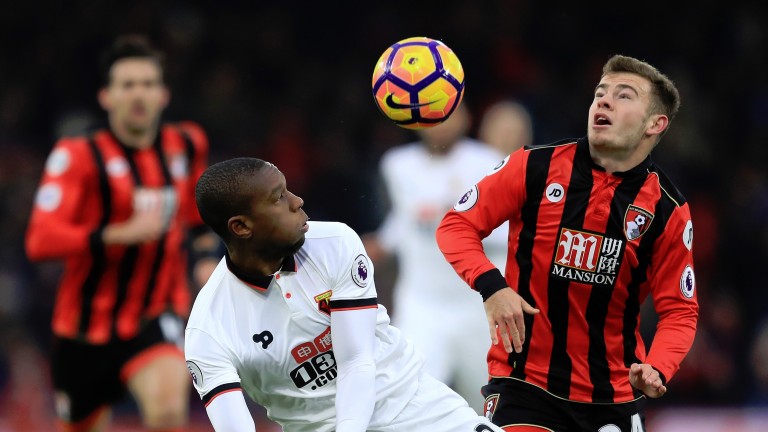 A nice quiet goalless draw would do Swansea nicely and would also prove to Eddie Howe that his Bournemouth side can actually defend – but it looks an unlikely outcome.

It’s a game that reeks of mistakes – and, therefore, goals – and the bookmakers agree, going 8-13 about both teams scoring and 3-4 about over 2.5 goals.

Bournemouth are 6-5 shots but look fairly unattractive at those odds. They hadn’t won in eight league games before Saturday’s 3-2 triumph over a West Ham side who look all over the place at the moment.

Swansea’s 13-5 quote is the more eye-catching match price if only because of the strides the Welsh side have been making under Paul Clement with four wins in their last seven hoisting them out of the relegation zone.

The draw, incidentally, is a 5-2 chance but it’s hard to make a case for a stalemate given the expectation of plenty of goals. The Swans haven’t drawn a game since November.

Bournemouth will have to be positive. A Hull win in the 3pm kick-off at Everton would leave them just three points clear of the relegation zone by the time this match starts and as their next four fixtures are against Southampton, Liverpool, Chelsea and Spurs, the significance of this game won’t be lost on Howe.

A 3-0 win at Swansea on New Year’s Eve – their last clean sheet – means they know how to beat the Welshmen, although that was pre-Clement so Swansea’s expectations are higher going into the reverse fixture.

But Bournemouth should get forward in numbers, as usual, and a bet on goal-getting winger Ryan Fraser to open the scoring looks a decent wager.

It’s been a good week for the Scot, whose form in Dorset earned him a first international call-up. He bagged at the Liberty Stadium in December and Swansea’s wobbly defence must be wary of his pacy, direct running.

The winger is likely to be up against young left-back Stephen Kingsley, whose last start was in a 4-0 drubbing by Arsenal two months ago.

Fraser is 12-1 to open the scoring and he represents a value alternative to candidates such as 11-goal Fernando Llorente and Josh King, who claimed a hat-trick against the Hammers despite missing a penalty.

Team news
Bournemouth
Tyrone Mings is suspended while Harry Arter and Junior Stanislas are doubts. Striker Callum Wilson is out for the season.

Swansea
Angel Rangel and Martin Olsson join Nathan Dyer and Jefferson Montero on the injured list. Fernando Llorente has recovered from a knock.

Key stat
Bournemouth have conceded at least twice in 14 of their last 17 matches.